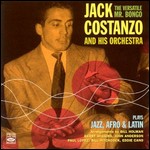 A composer, conductor and drummer, Costanzo is best known as a bongo player, and is nicknamed "Mr. Bongo". He visited Havana three times in the 1940s and learned to play Afro-Cuban rhythms on the bongos and congas.

Costanzo started as a dancer, touring as a team with his wife before World War II. After his discharge from the Navy, he worked as a dance instructor at the Beverly Hills Hotel, where Latin band leader Bobby Ramos heard Costanzo playing bongos in a jam session and offered him a job. Throughout the 1940s, Costanzo worked with several Latin bands, including a revived version of the Lecuona Cuban Boys, Desi Arnaz, and Rene Touzet.

Costanzo was in retirement until 1998 when he decided to make a comeback and in 2001 recorded Back From Havana under the Ubiquity Records umbrella. This album featured the likes of Black Note's Gilbert Castellanos, Steve Firerobing and the Panamanian singer Marilu. In 2002 he released another album with the same cast called Scorching the skins this time he also added Quino from Big Mountain. Costanzo has continued to tour and perform in California and abroad.

With Art Pepper and Conte Candoli

This article uses material from the article Jack Costanzo from the free encyclopedia Wikipedia and it is licensed under the GNU Free Documentation License.

Obviously Changed Pink Pedrazzi
Update Required To play the media you will need to either update your browser to a recent version or update your Flash plugin.