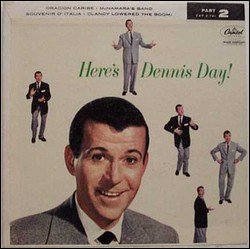 Day was born and raised in New York City, the second of five children born to Irish immigrants Patrick McNulty and Mary (née Grady) McNulty. His father was a stationary engineer.[4][5] Day graduated from Cathedral Preparatory Seminary in New York City, and attended Manhattan College in the Bronx, where he sang in the glee club.

Day appeared for the first time on Jack Benny's radio show on October 8, 1939, taking the place of another famed tenor, Kenny Baker. He remained associated with Benny's radio and television programs until Benny's death in 1974. He was introduced (with actress Verna Felton playing his mother) as a young (nineteen-year-old), naive boy singer a character he kept through his whole career. His first song was "Goodnight My Beautiful".

Besides singing, Dennis Day was a mimic. He did many impressions on the Benny program of various noted celebrities of the era, such as Ronald Colman, Jimmy Durante and James Stewart.

From 1944 through 1946 he served in the U.S. Navy as a Lieutenant. On his return to civilian life, he continued to work with Benny while also starring on his own NBC show, A Day in the Life of Dennis Day (1946-1951). Day's having two programs in comparison to Benny's one was the subject of numerous jokes and gags on Benny's show, usually revolving around Day rubbing Benny's, and sometimes other cast members' and guest stars' noses in that fact. His last radio series was a comedy/variety show that aired briefly on NBC during the 195455 season.

An attempt was made to adapt A Day in the Life Of Dennis Day as an NBC filmed series (Sam Berman's caricature of Dennis was used in the opening and closing titles), produced by Jerry Fairbanks for Dennis' sponsor, Colgate-Palmolive, featuring the original radio cast, but got no farther than an unaired 1949 pilot episode. In late 1950, a sample kinescope was produced by Colgate and their ad agency showcasing Dennis as host of a projected "live" comedy/variety series (The Dennis Day Show) for CBS, but that, too, went unsold. He continued to appear as a regular cast member when The Jack Benny Program became a TV series, staying with the show until it ended in 1965.

Eventually, his own TV series, The Dennis Day Show (aka The RCA Victor Show), was first telecast on NBC on February 8, 1952, and then in the 1953-1954 season. Between 1952 and 1978, he made numerous TV appearances as a singer and actor (such as NBC's The Gisele MacKenzie Show and ABC's The Bing Crosby Show and Alfred Hitchcock Presents) and voice for animation, such as the Walt Disney feature Johnny Appleseed, handling multiple characters.

During the final season of The Jack Benny Program (196465), Day was nearly 49 years old, although Jack was still delivering such lines as "That crazy kid drives me nuts ..."

His last televised work with Benny was in 1970, when they both appeared in a public service announcement together to promote savings and loans. This was shortly after the whole cast and crew of The Jack Benny Show had gotten together for Jack Benny's Twentieth Anniversary Special.

In 1972, he co-starred with June Allyson and Judy Canova in the First National Tour of the Broadway musical No, No, Nanette.

In 1976, Day was the voice of "The Preacher" in the Rankin-Bass production Frosty's Winter Wonderland and again worked with them in 1978, when he voiced Fred in The Stingiest Man in Town, which was their animated version of Charles Dickens's novel A Christmas Carol.

In 1948, Day married Peggy Almquist; the marriage lasted until his death in 1988. The couple had ten children. His brother Jim McNulty, two years younger, was married to actress/singer Ann Blyth.

Day died on June 22, 1988, of amyotrophic lateral sclerosis (ALS) (more commonly known as Lou Gehrig's disease), in Los Angeles, California. His star on the Hollywood Walk of Fame is at 6646 Hollywood Boulevard. He is interred in Culver City's Holy Cross Cemetery.[1]

He also appeared in Date with the Angels Season 1, Episode 13 as himself, Aired Friday 9:30 PM Oct 25, 1957 on ABC some records show it was episode 19 titled Star Struck

This article uses material from the article Dennis Day from the free encyclopedia Wikipedia and it is licensed under the GNU Free Documentation License.

Where Would I Be Lady A
Update Required To play the media you will need to either update your browser to a recent version or update your Flash plugin.