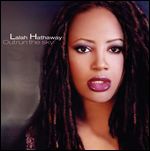 Eulaulah Donyll Hathaway (born December 16, 1968)[1] best known as Lalah Hathaway, and sometimes referred to as the First Daughter of Soul, is a contemporary R&B and jazz and Grammy Award winning artist. She is the daughter of soul singer Donny Hathaway and a classically trained vocalist. In 1990, Lalah Hathaway released a self-titled album. The album's first single was "Heaven Knows", produced by Derek Bramble. The follow-up single was "Baby Don't Cry" produced by Angela Winbush.

In 1991, Hathaway released her extended play, Night & Day in Japan. A Moment was released in 1994, debuting at #34 on the Top R&B albums chart. The lead single "Let Me Love You" charted on the Hot R&B charts at #37. In 1999, Lalah Hathaway collaborated with Joe Sample and released her third album The Song Lives On. After a five year hiatus, Hathaway returned with her fourth album Outrun the Sky. The single "Forever, For Always, For Love" peaked #1 on the Hot Adult R&B Airplay.

In 2007, Hathaway signed to Stax Records and in 2008 released her fifth album Self Portrait. It was released on June 3, 2008 in the United States, debuted at #63 on the Billboard's Hot 200 and reached the top ten on the Top R&B albums chart, making this album, Hathaway's most successful album to date. She received a Best Female R&B Vocal Performance Grammy Award nomination for "That Was Then". She went on to win the Grammy Award for Best R&B Performance along with Snarky Puppy for "Something" in 2014.

Lalah Hathaway was born in Chicago, Illinois, on December 16, 1968. Hathaway is the daughter of Donny Hathaway, an R&B and soul singer, and Eulaulah Hathaway, an accomplished musician. In 1979, Hathaway lost her father, Donny Hathaway at the age of ten. He had plunged fifteen floors from a New York hotel. His body did not have any indication of struggle, and the glass from the window in Hathaway's room had been removed; investigators determined Hathaway had committed suicide.

The Chicago native first put pen to paper, "with the music," as a 10th grader. In 1989, Hathaway signed to Virgin Records and released her first song "Inside the Beat", which was released as a promo single. Later, as a student at Berklee College of Music, she recorded her self-titled debut in 1990.

In 1994, Hathaway followed up her success with her second album, A Moment, which debuted at #34 on the Top R&B albums chart and #23 on the Heatseekers chart.[2] The release of her second album saw Hathaway embracing an even more progressive sound as producer Brian Alexander Morgan was enlisted for her upbeat lead single "Let Me Love You", which debuted at the #37 on the Hot R&B charts. Later that year, the songs "Separate Ways" and "Family Affair" were released as singles, although neither charted. The album did not sell as well as her first release and eventually Hathaway left Virgin.

She continued working with many other established artists, including Take 6, Mary J. Blige, The Winans, and Marcus Miller, writing, producing and doing background vocals. In 1999, Hathaway joined GRP Records and collaborated with jazz legend Joe Sample on the album The Song Lives On. The Song Lives On, topped the jazz charts at #2.[2] The album became Hathaway's second debut on the Billboard's Hot 200 and later charted on Top R&B album chart.[2] The single "When Your Life Was Low" charted only on the Hot R&B charts at #118. The album's second single "Fever" failed to chart.

The Song Lives On went on to become one of Hathaway and Joe Sample's most successful album to chart. In response to the album's success, Hathaway and Sample were honored with Billboard/BET On Jazz Award for "Mainstream Jazz Album".[3]

Also in 2004, Hathaway was featured on Donald Lawrence's debut solo album I Speak Life as a lead vocalist on "Don't Forget to Remember". In 2005, Hathaway was seen on the international Daughters of Soul tour along with Sandra St. Victor, Nona Hendryx, Indira Khan, Simone, and Joyce Kennedy.[5] Continuing her forays into the gospel realm, she could be found on Israel and New Breed's 2006 Chr*stmas album A Timeless Chr*stmas, which also featured Marcus Miller.

The recently re-launched Stax Records label had announced signing Hathaway. Hathaway stated, "The foundation of soul music is rooted in Stax Records. Working with Maurice White on the Interpretations project was more than special to me. There is no higher compliment than to be signed to a label whose music is timeless. I'm proud to carry the torch that will continue to bring quality soul music to a new audience."[6]

Her first release from Stax was the single "Love's Holiday," from the Earth, Wind & Fire tribute album Interpretations.[7] In April 2008, Hathaway released her lead single Let Go, which debut at #51 on the Hot R&B charts and #16 on the Hot Adult R&B charts. In June 2008, Hathaway's debut for Stax Records, Self Portrait was released. Collaborating again with producer Rex Rideout on much of the album and working with such artists as Rahsaan Patterson and Sandra St. Victor, Self Portrait became her most successful album to date, debuting at #6 Top R&B/Hip-Hop Albums chart and #63 on the Billboard's Hot 200. The album sold over 9,400 copies in the first week.[2][8]

In November 2008, Hathaway joined Will Downing and Gerald Albright for the Soulful Chr*stmas Tour. The tour, which kicked off on November 28 at the Detroit Opera House, appeared in the places of Washington, D.C., Memphis, Dallas, Houston, Indianapolis, Chicago, Detroit, Philadelphia, St. Louis, and Atlanta.[11] In January 2009, Hathaway appeared on BETJ in an interview and performed before an audience. Lalah Hathaway continued to support the album and she is currently schedule to perform at the Capital Jazz Festival in Columbia, MD, Essence Music Festival in New Orleans, LA, and Circle of Promise, which took place in July 2009.[12] In December, 2009 she won the Song of the Year award in the SoulTracks Readers' Choice Award for her duet with DC singer Eric Roberson, "Dealing."[13]

On August 14, 2011, Lalah Hathaway took to her Twitter account to release a free download of "If You Want To,"[14] the debut single from her sixth studio album Where It All Begins releasing October 18, 2011.[15]

Her performance in Snarky Puppy's 'Something' garnered widespread attention and praise due to her astonishing ability to sing multiple notes at one time.

Hathaway, an alto and contralto, has always been identified as the eldest daughter of her father Donny Hathaway. Hathaway's longest singing note held for 17 seconds in the performance of "Forever, For Always, For Love". In many reviews, Lalah is often compared to her father and reviewed to be continuing his vocal style. Lalah has often been criticized for not covering any of her father's songs, although she has appeared on others' recorded covers, such as Take 6's rendition of "Someday We'll All Be Free". Singer Natalie Cole (herself having been noted for decades-long resistance to recording Nat "King" Cole's music) actually stated that Lalah should herself cover at least one song, however, Hathaway replied with statement that she feels she doesn't need to. Hathaway also mentioned during the recording process of her fifth studio album, that she doesn't want to fit into the music industry's current music. Lalah stated, "I don't necessarily want to fit into whats happening now, but I want to stand with it, doing my own thing. I would really love it if people need the record. I put a lot of myself into this album, so I hope people can hear me and understand who I am."[16]

Although she has created a space for herself, it's not surprising that Hathaway remains connected to her late father and his classic sound. Lalah Hathaway stated "I am his daughter and thats the truth of who I am, every day. When I was 15, and then, 20, I didnt get why people were asking me how I felt about him and his music. But when I turned 25, I began to understand. Like my father, I want to leave a legacy of music that makes people really feel something, whether it be happiness, sadness, grief or heartache. I also want them to appreciate my humor which I know can be difficult to interpret in a song."[16]

Between album projects, Hathaway, who has recorded collaborations with Marcus Miller, Meshell Ndegéocello, and Mary J. Blige, keeps her creativity nourished by taking to the global stage and contributing her voice to Daughters of Soul Tour, a musical mélange founded by comrade Sandra St. Victor, and featuring Nona Hendryx, Joyce Kennedy as well as Indira and Simone, daughters of Chaka Khan and Nina Simone.[16]

While it might seem that "On Your Own" from Self Portrait, which re-teams her with Rex Rideout and Rahsaan Patterson, is inspired by a past heartbreak, in fact, the idea for the song came to her in a dream. While Lalah Hathaway is often known for singing down tempo songs, during the period of 2004 and 2008, Hathaway has done mid-tempo songs such as "Let Go", "Let Me Love You", and "Better and Better". Keeping in step with the theme of her family, Hathaway often journeys back to her childhood with "Little Girl", which she co-produced with Rex Rideout, Rahsaan Patterson, and Sandra St. Victor.[16]

On stage, Hathaway performs the songs longer than the album version with new arrangements. In concert, the stage mainly consists of Lalah Hathaway, the back-up singers, and the band. Often at audience's request, the vocals would be turned higher than band. Hathaway's band would often consist of a keyboardist, guitarist, bassist, and drummer. Most songs would last over approximately five minutes. Dawn! E. Robinson of VocalMusician.com attended a Hathaway in concert and reviewed stating, "The sound in the house was strange the band was really too loud all evening. Even when the sound guy turned LALAHs vocals up (at the audience's request) the band got louder. I got the impression that the sound onstage was good though, because none of the singers appeared to be over-singing."[17] Hathaway appeared with her band on Prince's Welcome to America opening concert at the Izod Center, December 15, 2010.

Lalah Hathaway is one of the National Ambassadors for the Circle of Promise. Launched in October 2007, the campaign was created by Susan G. Komen for the Cure to educate, empower and mobilize the African-American community in the fight against breast cancer.

"The rate of Black women and girls diagnosed with breast cancer is rising at an alarming rate," said Hathaway. "We are fighting a common enemy. Knowledge and having a take-charge mindset and attitude are critical weapons in the fight against this deadly disease. I became active because I want to be an ambassador of change. If I tell seven of my friends and they tell seven of their friends and so on, the circle will continue to expand and we'll create a chorus of voices within the African-American community to eradicate breast cancer. I truly believe that this is a goal we can achieve together." The Circle of Promise is nationally represented by several phenomenal African American women. Hathaway has raised money on her tours and record sales to help find a cure for women with breast cancer. She has also influenced women to get tested and tell family members to be aware of the cancer.[18]

This article uses material from the article Lalah Hathaway from the free encyclopedia Wikipedia and it is licensed under the GNU Free Documentation License.

Crash And Burn Thomas Rhett
Update Required To play the media you will need to either update your browser to a recent version or update your Flash plugin.