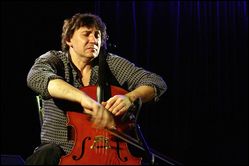 Courtois studied classical cello at the Conservatory of Aubervilliers, first with Erwan Fauré, and then with Roland Pidoux and Frédéric Lodéon. He also played Didier Levallet and Dominique Pifarély, and since 1988 in bandslead by Christian Escoudé and Didier Levallet ("Swing String System") in Paris. In addition he started his own quartet in 1990, releasing his debut solo album Cello News the same year.

He played in the duo with Martial Solal from 1993, with Julien Lourau in "Pendulum Quartet", with Franck Tortiller in the band "Tukish Blend" and the trio "Zebra 3", and in addition he played with Xavier Desandre Navarre. He has also contributed to the album Marvellous (1994) with Michel Petrucciani, Tony Williams and Dave Holland.

In 1995 Courtois performed his first solo concerts, he played within François Corneloup's Septett, and collaborated with Louis Sclavis making music for film and theatre. He also recorded two albums with the quintet of Rabih Abou-Khalil, and in 1998 he participated in an ensemble led by Pierre Favre, and a trio with Yves Robert. In 2000 he performed in three trio constellations, in 2002 a quintet played at the festival "Banlieues Bleues", and in a trio with Ellery Eskelin and Sylvie Courvoisier.

In 2005 Courtois joined Michele Rabbia and Marilyn Crispell to play in Bamako with his own trio. He was involved with Henri Texiers in recording the music to the movie Holy Lola by Bertrand Tavernier. In 2006 he initiated a new quartet with Jeanne Lagt, Marc Baron and François Merville. In 2008 he released the album L' homme avion with Ze Jam Afane.

With Michele Rabbia and Marilyn Crispell

With Louis Sclavis and Dominique Pifarely

This article uses material from the article Vincent Courtois from the free encyclopedia Wikipedia and it is licensed under the GNU Free Documentation License.

Angels On My Side Rick Astley
Update Required To play the media you will need to either update your browser to a recent version or update your Flash plugin.