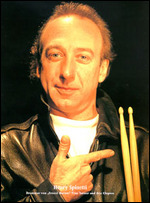 Henry Anthony George Spinetti (born 31 March 1951)[1] is a Welsh session drummer whose playing has featured on a large number of prominent rock and pop albums. He is the younger brother of actor Victor Spinetti (1929–2012).

Born in Cwm, near Ebbw Vale, Monmouthshire, Wales, Spinetti began his recording career with the band Scrugg, which recorded on the Pye label. Band members included fellow Welshman Jack Russell, Chris Dee and the South African singer-songwriter, John Kongos. In the early 1970s, Spinetti appeared with Kongos on BBC Television's Top of The Pops performing Kongos' chart hit single, "He's Gonna Step on You Again".[2] After leaving Scrugg, Spinetti's early work included spells with The Herd and Judas Jump, who were the opening act at the Isle of Wight Festival 1970.[3]

Spinetti played on eight of the ten tracks on Gerry Rafferty's album City to City (including the hit "Baker Street"),[4] and also played in the 2002 memorial concert for George Harrison, "The Concert For George".

Spinetti's recording credits include the following:

This article uses material from the article Henry Spinetti from the free encyclopedia Wikipedia and it is licensed under the GNU Free Documentation License.

I Just Can't Stop Loving You Michael Jackson & Siedah Garrett
Update Required To play the media you will need to either update your browser to a recent version or update your Flash plugin.