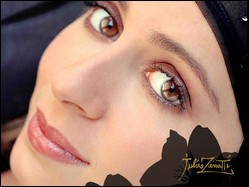 Julie Zenatti, (born 5 February 1981),[1] is a French singer celebrity. She first played the role of Fleur-de-Lys and later Esmeralda on stage for the musical Notre-Dame de Paris. Zenatti was involved with Notre-Dame de Paris co-star Patrick Fiori from 2002 to 2006 and the pair were engaged for two years. She's a judge of the reality competition X Factor France.[2][3]

Zenatti was born in 1981 in Paris. She is of Algerian, Italian and Jewish descent.[4] Her father is an accomplished amateur pianist, and used to accompany her singing on the piano.[1]

This article uses material from the article Julie Zenatti from the free encyclopedia Wikipedia and it is licensed under the GNU Free Documentation License.