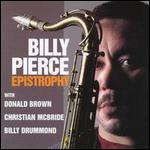 He played with Art Blakey and the Jazz Messengers in the early 1980s[1] and in Tony Williams's quintet in the mid-1980s to early 1990s.[2] He also has released numerous CDs for which he is the band leader.[3]

He studied with Joe Viola and Andy McGhee at Berklee College of Music, and with Joe Allard. He is the school's woodwind department chair.[4]

This article uses material from the article Bill Pierce from the free encyclopedia Wikipedia and it is licensed under the GNU Free Documentation License.

Weiss nid was es isch Stephan Eicher
Update Required To play the media you will need to either update your browser to a recent version or update your Flash plugin.