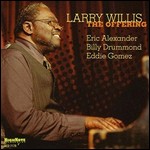 After his first year studying music theory at the Manhattan School of Music he began performing regularly with Jackie McLean. After he graduated he made his first jazz recording, McLean's Right Now!, which featured two of Willis' compositions. His first recording of any type, however, was as a singer with the Music and Arts Chorale Ensemble, performing an opera by Aaron Copland under the direction of Leonard Bernstein. He decided to concentrate on jazz because of the difficulties African American musicians had in finding work in concert music. He is still recording and touring around the world.

Throughout his career he has performed with a wide range of musicians, including a stint of seven years as keyboardist for Blood, Sweat & Tears (beginning in 1972). He spent several years as pianist for Nat Adderley, as well as Roy Hargrove. His latest recording with Paul Murphy, Exposé, demonstrated the fusion principals of bebop and avant-garde jazz. His composition "Sanctuary" began exploring works employing strings. After a successful performance in Frank Lloyd Wright's Annie Pfieffer Chapel at Florida Southern College's "Child of the Sun" Jazz Festival he was commissioned to write a full scale orchestral work for jazz trio and orchestra. He received the Don Redman award in 2011, and the Benny Golson Jazz Master Award at Howard University in 2012.

With Blood, Sweat, and Tears

This article uses material from the article Larry Willis from the free encyclopedia Wikipedia and it is licensed under the GNU Free Documentation License.

Nothing's Gonna Stop Us Now Starship
Update Required To play the media you will need to either update your browser to a recent version or update your Flash plugin.