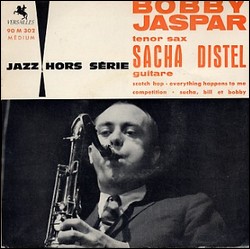 Born in Liège, Belgium, Jaspar learned to play piano and clarinet at a very young age. Later, he took up the tenor saxophone and flute.

With the "Bop Shots" band, he took his first steps in the jazz world. In 1950, Jaspar moved to Paris, playing and recording with the best musicians of the era. Here he met his future wife, Blossom Dearie.

In 1956, Jaspar was persuaded to try his luck in the United States, where his reputation in jazz circles had preceded him. He played and recorded with the quintet of J. J. Johnson, with Kenny Burrell, Miles Davis, John Coltrane, Toshiko Akiyoshi, Donald Byrd and many others.

In 1961/1962, Jaspar returned to Europe for a year for a series of concerts and a number of recordings. With his colleague, Belgian guitarist René Thomas, he formed a successful quintet. In some sessions, this was expanded to a powerful sextet with American trumpeter Chet Baker. One of those sessions was immortalised on the record Chet Is Back!, recorded in 1962.

With The Prestige All Stars

This article uses material from the article Bobby Jaspar from the free encyclopedia Wikipedia and it is licensed under the GNU Free Documentation License.

Dancing Sky Annakin
Update Required To play the media you will need to either update your browser to a recent version or update your Flash plugin.