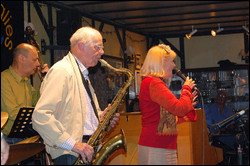 Tommy Whittle was born in Grangemouth, Scotland, and started playing clarinet at the age of 12 before taking up the tenor saxophone at 13. He moved to Chatham, Kent, at 16 and in 1943 started playing in the dance-hall band of Claude Giddins in nearby Gillingham.[5]

During the 1940s, Whittle played with Johnny Claes, Lew Stone, Carl Barriteau and Harry Hayes. In 1946 he joined Ted Heath's band, playing with him until 1952 when he moved on to play in Tony Kinsey's small group at the 51 Club in London. Later in the 1950s he joined Cyril Stapleton's BBC Show Band where he became featured as a soloist in nationwide broadcasts. In April 1954 he formed his own quintet with Harry Klein and Dill Jones, later touring with a ten-piece band for 14 months. He then led various small groups as well as doing jazz club work. In 1955 he was voted Britain's top tenor-sax player in the New Musical Express poll and topped the Melody Maker poll the following year.

During the 1950s he took his sextet to France and the USA and in 1956 took a quartet (with Eddie Thompson, Brian Brocklehurst and Jackie Dougan) to the USA in exchange for a visit by Gerry Mulligan. He also briefly deputized in the Stan Kenton Band which was touring the UK. In 1958 he took up the post of band leader at the Dorchester Hotel in London, where he stayed until early 1961.

Then followed a long period with the Jack Parnell ATV Orchestra and later with Laurie Johnson's London Big Band, while he continued to play regularly at jazz clubs. During this time he also recorded with Benny Goodman. During the 1980s and 1990s, as well as an enduring commitment to jazz, he was also in demand as a session musician and often appeared in the Ted Heath Band, then led by Don Lusher who was a trombonist in the Heath band for many years. Through the 1990s and 2000s he continued to lead his own quartet and accompanied the successful Ella Fitzgerald Songbook, a show devised by singer Barbara Jay (his wife). Also during this period he became a member and then leader of the Pizza Express Allstars Jazz Band.

In July 2005 Whittle was awarded the prestigious medal of the Worshipful Company of Musicians for lifetime achievement in British jazz.[6] His last few gigs included the Bridgewater Hall in Manchester (October 2012)[7] and with Ray McVay's tribute Glenn Miller Orchestra at the Wolverhampton Grand Theatre (January 2013).[8] Tommy Whittle died on his 87th birthday after contracting pneumonia while on holiday in Spain.[1]

This article uses material from the article Tommy Whittle from the free encyclopedia Wikipedia and it is licensed under the GNU Free Documentation License.