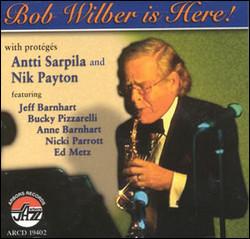 Bob Wilber (born 15 March 1928) is an American jazz clarinetist, saxophonist, and band leader. Although his scope covers a wide range of jazz, Wilber has been a dedicated advocate of classic styles, working throughout his career to present traditional jazz pieces in a contemporary manner. He played with many distinguished jazz leaders in the 1950s and 1960s, including Bobby Hackett, Benny Goodman, Sidney Bechet, Jack Teagarden and Eddie Condon. In the late 1960s, he was an original member of the World's Greatest Jazz Band, and in the early 70s of Soprano Summit, a band which gained wide attention. In the late 1970s, he formed the Bechet Legacy Band.

Wilber was active in jazz education, including working as director of the Smithsonian Jazz Repertory Ensemble. He has written for films, including The Cotton Club. In his autobiography, Music Was Not Enough, he recounts his childhood, meeting his mentor Sidney Bechet, in 1946, and his struggles as a musician in the 1950s and 1960s.

Wilber, a "superb soprano saxophonist, a classic clarinetist, a gifted arranger and composer, and an invaluable preserver and enhancer of jazz tradition," was born in New York City on March 15, 1928.[1]:45 He became interested in jazz at the age of three when his father brought home a recording of Duke Ellington's song "Mood Indigo." In 1935, the family moved to Scarsdale, New York, and at the age of thirteen Wilber began formal clarinet study under his first teacher, Willard Briggs.[1]:46 He began listening to jazz from New Orleans, Kansas City, and Chicago by Duke Ellington, Louis Armstrong, Jelly Roll Morton, Eddie Condon, and Frank Teschemacher. He played jazz in high school and with his friends formed a "hot club", listening and jamming to records. Wilber graduated from high school in 1945. Although his parents wanted him to attend an Ivy League college, he was set on becoming a musician. He attempted to compromise with his parents by attending the Eastman School of Music in Rochester, New York, in the fall of 1945.[1]:47 But after one term at Eastman, he dropped out and moved back to New York City to "hang out on Fifty-second Street and in the Village."[1]:47

In 1945, Wilber formed the Wildcats, which included pianist Dick Wellstood and trombonist Ed Hubble. The Wildcats were the first jazz group in New York to "do what Lu Watters and Turk Murphy had been doing on the Coast – playing the music of the Hot Five and the Red Hot Peppers and the Creole Jazz Band."[1]:47 The group performed regularly at Jimmy Ryan's club over the next two years and was recorded in 1947 by Ramp-art Records.[2] Wilber worked with some of the best traditional jazz musicians of the era, including Muggsy Spanier, Baby Dodds, Danny Barker, Bud Freeman, Pee Wee Russell, George Wettling, Jimmy McPartland, Wild Bill Davison, and James P. Johnson.[3]

Sidney Bechet was one of the most accomplished and influential musicians of the post World War I period and was viewed by many as the best clarinetist of his time. Nevertheless, Bechet's primary instrument eventually became the soprano saxophone. In 1944, Wilber had become fascinated with Bechet's sound, and later that year, when Wilber was sixteen, he was introduced to Bechet through Mezz Mezzrow. He found out there was an opening for a pupil out at Bechet's house in Brooklyn, and so he became a Bechet pupil.[4] In the spring of 1945, he began studying both clarinet and soprano saxophone under Bechet and eventually lived with him for several months. He often sat in with Bechet at Jimmy Ryan's and they often performed duets. In 1948, Bechet sent Wilber to Nice, France, in his absence to perform at the first jazz festival.[1]:48–49 At the festival, Wilber's group shared the bill with Louis Armstrong and his Allstars. Wilber recorded for Columbia Records, Commodore, and Circle with Bechet and with his own group in the late 1940s.[5]

In 1948, Wilber formed a trio to play at intermissions at the Savoy Café in Boston. The trio featured traditional New Orleans-style jazz (dixieland). Eventually, Wilber expanded the band to a sextet and was booked as the main attraction: Bob Wilber and the Dixieland Band. This group featured Wilber on clarinet and soprano sax, Henry Goodwin on trumpet, Jimmy Archey on trombone, Dick Wellstood on piano, Johnny Fields on bass, and Tommy Benford on drums.[6] Wilber gained a strong following in Boston and the Savoy gig lasted through the better part of 1949. The Savoy also led to other opportunities to play in the New York City area through 1950, most notably at Jimmy Ryan's and the Stuyvesant Hotel.

With The Six (with John Glasel)

This article uses material from the article Bob Wilber from the free encyclopedia Wikipedia and it is licensed under the GNU Free Documentation License.