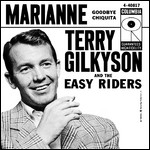 Gilkyson was born in Phoenixville, Pennsylvania, and graduated from St. George's School, Newport in 1935. By his early twenties, he had become a worker on a ranch in Tucson, Arizona, then joined the military during World War II. In 1947, he married Jane Gilkyson and moved to California to pursue a career as a folk singer.

He wrote and recorded "The Cry of the Wild Goose", which became a hit song for Frankie Laine in 1950, as well as the 1953 hit song "Tell Me a Story" recorded by Jimmy Boyd and Laine. In 1951 Gilkyson appeared in, as well as wrote continuing songs for, the Cinecolor Western film Slaughter Trail that, in the manner of High Noon, had ballads throughout the film relating to the plot. He was also featured vocalist on The Weavers No. 1 hit recording of "On Top Of Old Smokey", as well as their recording of "Across The Wide Missouri". He appeared and sang in the 1956 Western Star in the Dust with John Agar, Mamie Van Doren, and Richard Boone.[2]

In 1956, he formed a group called The Easy Riders with Richard Dehr and Frank Miller. The group had a major hit with "Marianne", both written and performed by the trio. The record sold in excess of one million copies, earning a gold disc.[3] The three also wrote "Memories Are Made of This", which became a popular song in several versions, most particularly the one sung by Dean Martin backed by the Easy Riders. An adaptation of the song became an anthem for refugees from the 1956 Hungarian Revolution.

In the 1960s, he left the group to work for the Walt Disney Studios, writing music both for movies and the television series The Wonderful World of Disney especially "The Scarecrow of Romney Marsh." In 1968, he was nominated for an Academy Award for "The Bare Necessities" from the 1967 animated film The Jungle Book.[4]

He died in Austin, Texas, while visiting family. His interment was at Morris Cemetery in his hometown of Phoenixville. Guitarist Tony Gilkyson, formerly of the band X, and Austin singer-songwriter Eliza Gilkyson are Terry Gilkyson's son and daughter. His other daughter Nancy has served for 20 years as a vice president at Warner Bros. Records. [5]

This article uses material from the article Terry Gilkyson from the free encyclopedia Wikipedia and it is licensed under the GNU Free Documentation License.