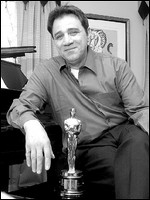 Franke Jon Previte is a composer who grew up in New Brunswick, New Jersey.[1]

He was born in New Brunswick, New Jersey to Franke Previte, Sr., an opera singer

He was with the New Jersey rock quintet Franke and the Knockouts as the singer and songwriter. Previously he had sung with the Oxford Watch Band and the heavy metal band Bull Angus. Franke and the Knockouts were signed by Millennium Records in 1981 and had three U.S. Top 40 singles and two Top 50 albums. Franke and the Knockouts' biggest single, "Sweetheart" was written by Previte and Knockout guitarist Billy Elworthy and became a Top 10 hit in 1981. The group's other two Top 40 hits were "You're My Girl" and "Without You (Not Another Lonely Night)". The band switched to Music Corporation of America in 1984, but they split up around 1986. Franke Previte co-wrote music for the hit soundtrack to the 1987 movie Dirty Dancing. He has a sister who is a Ph.D. scientist in the pharmaceutical industry.

This article uses material from the article Franke Previte from the free encyclopedia Wikipedia and it is licensed under the GNU Free Documentation License.

One Life James Bay
Update Required To play the media you will need to either update your browser to a recent version or update your Flash plugin.