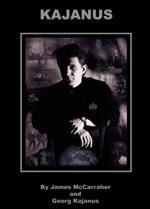 Kajanus was born in Trondheim, Norway, to Prince Pavel [also Paulo] Tjegodiev of Russia and Johanna Kajanus, a French/Finnish sculptress, bronze medal winner for sculpture at the Exposition Internationale des Arts et Techniques dans la Vie Moderne (1937), and granddaughter of Robert Kajanus, the Finnish composer, conductor, champion of Sibelius and founder of the Helsinki Philharmonic Orchestra. He is the brother of the late actress and film-maker Eva Norvind and the uncle to Mexican theater and television actress Nailea Norvind.[1][2][3]

Kajanus moved with his mother and sister to Paris at the age of twelve where he studied music and classical guitar, as well as attending the Cité Universitaires flying school. The family then relocated to Montreal, Canada, where Kajanus worked as a stained-glass window designer.[1]

Kajanus was a member of UK-based folk rock band Eclection, who released a self-titled album in 1968[4] and wrote Cliff Richard's single "Flying Machine" (1971).

Kajanus and Phil Pickett, who been acquainted for some time, collaborated on an album, Hi Ho Silver! (1972), as Kajanus/Pickett. Deciding to form a group, tentatively named KP Packet, Kajanus and Pickett enlisted drummer and percussionist Grant Serpell (Affinity), and keyboard player and guitarist Henry Marsh (Gringo). In 1973, the foursome made their first recordings in a small studio in North London. Most of this material was not released at the time, but three demos are featured in Sailor's Buried Treasure 2CD box set (2006).[5][6]

Kajanus had developed a musical theater concept, Red Light Review, based on his memories of being a young man in places like Pigalle in Paris's red-light district. Encouraged by Grant Serpell to rework this material as pop songs, Kajanus devised the concept for Sailor.[5][7][8]

Sailor signed to Epic Records-CBS Records and between 1974 and 1978 released five albums with Kajanus: Sailor, Trouble, The Third Step, Checkpoint (without Pickett) and Hideaway. Kajanus was the lead singer, guitarist and, for the first three albums, the sole songwriter for the band, penning its two major hits, "A Glass of Champagne" and "Girls, Girls, Girls".

Kajanus then left Sailor, leaving Pickett as the creative force behind their next album, Dressed for Drowning.

Kajanus then left Sailor in 1978 to experiment with electronic music, forming DATA with Frankie and Phil Boulter. The classical-oriented title track of DATAs first album, Opera Electronica, was the theme music to the short film, Towers of Babel (1981). DATA then followed with two more studio albums, 2-TiME (1983) and Elegant Machinery (1985).

Shortly after DATA disbanded, Kajanus formed And the Mamluks with Henry Marsh. They recorded only four songs, with two being released on a Razormaid! anthology on vinyl, Razormaid: The Epilogue: Back to Basics (1985). Kajanus and Marsh also collaborated on the soundtrack for the British TV series, The Kid (1986), starring actor/singer Steve Fairnie.

He worked with the Japanese composer and musician Shigeru Umebayashi, co-writing and producing songs for his album, Ume (1988).[1][9]

In 1989, Kajanus reunited with Henry Marsh and Phil Pickett to write and record some new material. This was not released at the time, but three songs are featured in Sailor's Buried Treasure 2CD box set (2006).[6]

Kajanus, Marsh, Pickett and Grant Serpell reformed Sailor in 1990. The group recorded two albums, Sailor (1991) and Street Lamp (1992), with Kajanus once again writing and arranging all the material. They achieved further chart success in continental Europe with singles such as "La Cumbia" and "The Secretary".[5]

Kajanus composed the soundtracks for two documentaries directed by German filmmaker Monika Treut: Didn't Do It for Love (1997) and the award-winning Gendernauts (1999).

In 2008, Kajanus began working with Roberto Trippini and Barbie Wilde on a new version of the Sailor musical - an update of his original Red Light Review concept - which he describes as "a bittersweet musical about two people searching for love in the ruins of post-War Marseille".[10][11]

Kajanus's other current musical project is People Industry, which he describes as "an exuberant, musical exploration of the human journey."[12]

This article uses material from the article Georg Kajanus from the free encyclopedia Wikipedia and it is licensed under the GNU Free Documentation License.