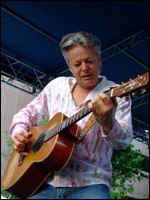 William Thomas "Tommy" Emmanuel AM (born 31 May 1955) is an Australian guitarist, songwriter and singer, best known for his complex fingerstyle technique, energetic performances and the use of percussive effects on the guitar. Although originally a session player in many bands, Emmanuel has carved out his own style as a solo artist in recent years, releasing award-winning albums and singles. In the May 2008 and 2010 issues of Guitar Player Magazine, he was named "Best Acoustic Guitarist" in their readers' poll.[1] In June 2010 Emmanuel was appointed a Member of the Order of Australia (AM).[2]

One of six children, Emmanuel was born in Muswellbrook, New South Wales, Australia in 1955. He received his first guitar in 1959 at age four and was taught by his mother to accompany her playing lap steel guitar. At the age of seven in 1961 he heard Chet Atkins playing on the radio. He vividly remembers this moment and says it greatly inspired him.[3]

By the age of six, in 1961, he was a working professional musician. Recognizing the musical talents of Emmanuel and his older brother, Phil, their father created a family band, sold the home, and took his family on the road. With the family living in two station wagons, much of Emmanuel's childhood was spent touring Australia, playing rhythm guitar, and rarely going to school. Eventually the New South Wales Department of Education insisted that the Emmanuel children had to go to school regularly.[3][4]

After his father died in 1966, the Emmanuels settled in Parkes. Tommy Emmanuel eventually moved to Sydney where he was noticed nationally when he won a string of talent contests in his teen years.[3][5] By the late 1970s, he was playing drums with his brother Phil in the group Goldrush as well doing session work on numerous albums and jingles. He gained further prominence in the late 1970s as the lead guitarist in The Southern Star Band, the backing group for vocalist Doug Parkinson. During the early 1980s, he joined the reformed lineup of leading 1970s rock group Dragon, touring widely with them, including a 1987 tour with Tina Turner; he left the group to embark on a solo career.

In 1994, Australian music veteran John Farnham invited him to play guitar next to Stuart Fraser from Noiseworks for the Concert for Rwanda. Emmanuel had previously been a member of Farnham's band during the early 1980s and featured on the album Uncovered, and rejoined after the 1994 concert.

Emmanuel and his brother Phil performed live in Sydney at the closing ceremony of the Summer Olympics in 2000. The event was televised worldwide with an estimated 2.85 billion viewers.[5]

In December 2007, he was diagnosed with heart problems[6] and was forced to take a break from his hectic touring schedule due to exhaustion, but returned to full-time touring in early 2008. In 2009 he worked with fellow local artists, Ray Burgess, Marty Rhone, John St Peeters and John "Swanee" Swan to release a single, "Legends of the Southern Land".[7]

In June 2010, Emmanuel was appointed a Member of the Order of Australia (AM).[2]

Emmanuel has said that even at a young age he was fascinated by Chet Atkins's musical style (sometimes referred to as Travis picking) of playing bass lines, chords, melodies and harmonies simultaneously using the thumb and fingers of the right hand, achieving a dynamic range of sound from the instrument. Although Emmanuel's playing incorporates a multitude of musical influences and styles, including jazz, blues, bluegrass, folk and rock, this type of country fingerstyle playing is at the core of his technique. While Emmanuel has never had formal music training, and does not read nor write music, his natural musical ability, intrinsic sense of rhythm and charisma has gained him fans from all over the world. As a solo performer, he never plays to a set list and uses a minimum of effects onstage.[5] He usually completes studio recordings in one take.

In his solo shows, he mainly plays guitars made by Maton, an Australian guitar manufacturing company. He usually travels with two custom Maton EBG808 TE models and one TE1 model, both of which are Tommy Emmanuel artist signature models.[13] He has been playing Maton guitars for most of his career and is somewhat of an ambassador to the company due to his long-standing association with the brand.[14] Emmanuel is known for the battered and worn-down appearance of his guitars. This is a result of his dynamic, energetic playing and percussive techniques. One of his signature performances, for example, involves striking the whole body of the guitar in various places with his hands or a drummer's snare-drum brush to emulate the sound of a percussion kit.

Emmanuel usually keeps one Maton EBG808 in standard guitar tuning (E-A-D-G-B-E), while he tunes his second Maton EBG808 to D-G-D-G-B-E (G6 tuning) and his TE1 to C♯-F♯-B-E-G♯-C♯. He generally uses 0.12 gauge (light) strings on one EBG808 and 0.13 gauge (medium) strings on the second Maton EBG808 and on the TE1. This allows him to quickly change tuning by swapping between guitars during a show if needed, rather than spending time onstage retuning one guitar.

Emmanuel often curls his left-hand thumb around the neck of the guitar onto the fretboard to play some notes, rather than using only his fingers to play—contrary to how classical guitarists play, but not unusual for jazz and country guitarists. He frequently plays common three-finger chord shapes with just two fingers. He commonly uses a thumbpick, a flat pick (plectrum), his fingers or a combination of these in his playing, a style known as hybrid picking. Amongst his trademark rapid virtuosic licks and cascading harmonic progressions, he often uses a technique that imitates an electric guitar's tremolo system on acoustic guitar—by pressing the palm of his right hand against the sound board of the guitar near the neck joint, while maintaining forward pressure with his left hand on the top of the headstock, the guitar neck slightly bends away from the body and consequently affects the pitch of the strings to achieve the desired sound.

As a young man in Australia, Emmanuel wrote to his hero Chet Atkins in Nashville, Tennessee. Eventually Atkins replied with words of encouragement and a longstanding invitation to drop by to visit.[15]

In 1997, Emmanuel and Atkins recorded as a duo and released the album The Day Finger Pickers Took Over the World, which was also Atkins's last album before he died. Emmanuel and Atkins appeared together on The Nashville Network's 'Country Christmas' in late 1997 and on that occasion Atkins stated about him: "He is one of the greatest guitar players I've ever seen." Atkins gave Emmanuel the guitar on which Arthur "Guitar Boogie" Smith recorded "Guitar Boogie", one of the foundation performances of the blues guitar world, and a regular feature of Emmanuel's shows.

In July 1999, at the 15th Annual Chet Atkins Appreciation Society Convention,[16] Atkins presented Emmanuel with a Certified Guitar Player award, an honor Chet personally bestowed to only four guitarists.[3] This award gains its fame from being bestowed by Atkins himself, a widely recognized leader in guitar music. The award states: "In Recognition of His Contributions to the Art of Fingerpicking." Tommy performs at the Chet Atkins Appreciation Society (CAAS) in July each year in Nashville.[17]

In addition to being influenced by Chet Atkins, Emmanuel has stated that guitarist Hank Marvin was his mentor.

His rendition of "Classical Gas" by Mason Williams was used on the animated television series American Dad! in the season 10 episode entitled Permanent Record Wrecker. It was played by Roger Smith in a coffee shop guitar battle.[18]

This article uses material from the article Tommy Emmanuel from the free encyclopedia Wikipedia and it is licensed under the GNU Free Documentation License.

No Sweat Phil Carmen
Update Required To play the media you will need to either update your browser to a recent version or update your Flash plugin.