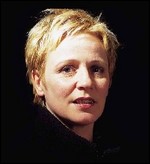 Annie learned trombone at school; at 14 she was already busy playing with brass bands, local dance groups and the Manchester Youth Jazz Orchestra and began her professional career at sixteen. Among her initial influences were Miles Davis, Charles Mingus, and Wayne Henderson. She is also eclectic and willing to try other genres besides jazz.

In the 1970s she moved to London where she found herself in demand. In the following years she worked with Chris McGregor's Brotherhood of Breath, National Health, Carla Bley, Robert Wyatt, Joan Armatrading, Chris Rea, Bill Wyman, Elvis Costello, Jah Wobble and others. In 1984 she formed her own band and released her first CD as its leader. She was a member of Working Week [2], has contributed to far more than 50 albums and has recorded five albums under her own name.[3][4]

She had been part of the Jazz Jamaican Allstars alongside saxophone player Denys Baptiste and her own band blends reggae rhythms with jazz. In 2003 she played trombone on Robert Wyatt's award-winning album Cuckooland. Lately, she has participated in the Frank Zappa tribute band Zappatistas [5] with jazz guitarist John Etheridge and others. In 2004 BBC Radio 4 called her "one of the country's great trombonists."[6] In 2006, she joined Belgian band The Wrong Object for a series of gigs later documented on the Voiceprint CD, "Platform One". In 2007, she played trombone on most of the tracks contained in Robert Wyatt's album Comicopera.

Whitehead also has worked with her partner, Jennifer Maidman and teaches jazz at London's Centre for Young Musicians.

This article uses material from the article Annie Whitehead from the free encyclopedia Wikipedia and it is licensed under the GNU Free Documentation License.