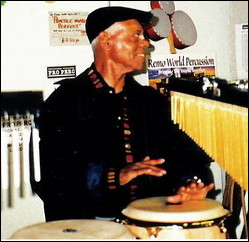 Born in Lawton Batista, Havana, Cuba in 1924 (although the birth year is uncertain),[2] he was orphaned by age 7 and lived on the streets,[2] making a living selling vegetables. Peraza gained a reputation as a sportsman, and became proficient at baseball and boxing. At one time he was a boxing coach. A natural musician, a chance encounter at a baseball game led to his first professional gig with famous local bandleader Alberto Ruiz. He then made his reputation as drummer and dancer playing with the cream of Havana's small bands or "conjuntos", the most famous being Ruiz's Conjunto Kubavana.

He left Cuba for Mexico in 1948 to tend to his sick friend, conga drummer Mongo Santamaría. They subsequently arrived in New York City in 1949, where after sitting in with Machito's big band, Peraza was personally requested by the great Charlie Parker to participate on a record date with Parker, Buddy Rich and many others. He also recorded with Slim Gaillard in New York in November 1949, a session that produced an exemplary virtuoso performance from Peraza on "Bongo City". He toured the entire U.S. with Slim Gaillard's band and ended up in San Francisco, where Gaillard owned the famous San Francisco nightclub named Bop City. After a period in Mexico, where he recorded with Perez Prado and also recorded many soundtracks for the Mexican movie industry, he returned to the U.S. and settled in San Francisco, a city of such charm and beauty that he stayed there through his final days.[3] While located on the West Coast, he worked with Dizzy Gillespie, Gaillard, toured extensively with Charles Mingus and Dexter Gordon and performed up and down California for the Mexican farm workers with Puerto Rican actor and musician Tony Martinez (who played "Pepino" on the TV show The Real McCoys). Armando also headed up an Afro-Cuban dance review at the Cable Car Village[4] club in San Francisco, attracting a clientele from Hollywood that included Errol Flynn, Marlon Brando and Rita Hayworth.

In 1954, while performing in San Francisco with pianist Dave Brubeck, Peraza met Cal Tjader, who was Brubeck's drummer at the time. The jazz writer Leonard Feather recommended Armando to Fantasy Records, along with Tjader to record an Afro-Cuban album, which was titled Ritmo Caliente and was groundbreaking in its use of Afro-Cuban rhythms with a Jazz sensibility and was followed up in 1957 with Mas Ritmos Caliente. During this period, Peraza was introduced to British pianist George Shearing by bassist Al McKibbon. Peraza joined Shearing's band for the next 12 years and was a collaboration that found Peraza at the forefront of a new wave of popularity for Afro-Cuban music. Shearing's music is now regarded as "light" in jazz terms, but the rhythms and harmonic structures Peraza introduced to the pianist's music were unerringly authentic. It was during his time with Shearing that Peraza emerged as a composer, writing and recording twenty-one songs for Shearing, such as "Mambo in Chimes", "Mambo in Miami","Ritmo Africano", "Armando's Hideaway", "This is Africa", "Estampa Cubana" and many others. These recordings were at the heart of the "mambo craze", which swept the U.S. and the world and Peraza became highly visible, which was a major achievement for an Afro-Cuban at that time.

Peraza's extraordinary technique and expressive power as a hand drummer became a feature of Shearing's performances. He toured the world over with Shearing but it was in America where he experienced persistent and institutionalized racism. An example of this was an incident in Miami during dates with Shearing and Peggy Lee in 1959, Peraza and the other black members of the band were not allowed to stay at the same hotel as the white musicians. Shearing and Lee resolved the situation by threatening to pull out of the performance unless Peraza and the others were "allowed" to stay at their hotel. Shearing was one of the first racially integrated jazz groups, which was groundbreaking in its own right. While with Shearing, Peraza had the distinct opportunity to play with the classical symphonies of Boston, Philadelphia, New York and Oklahoma City. He also participated while with Shearing, in a command performances for Elizabeth II of the United Kingdom.

In 1959, Peraza joined Mongo Santamaría for the classic Mongo album, one of the most important recordings of Afro-Cuban "folklore" music ever. It included conga drummer Francisco Aguabella, another contemporary and friend of Peraza, and "Afro-Blue", a song that became a jazz standard once John Coltrane had recorded it. The album Mongo was later combined with the 1958 Mongo Santamaria album Yambo as the compilation Afro Roots in 1972.[5]

In the early 1960s, Peraza joined Cal Tjader's band for the next six years. He also was encouraged to perform and record in Southern California by his friend, jazz drummer Shelly Manne. Peraza performed throughout the area at such venues as Shelly's Manne-Hole (owned by Shelly Manne) and The Lighthouse in Hermosa Beach. A highlight was performing with the Stan Kenton Band for the opening of the Hollywood Bowl. Through his friendship with Manne, he was introduced to Judy Garland, who immediately signed Peraza to play in her orchestra for The Judy Garland Show, a television series that ran from 1963 to 1964. In the fall of 1964, he recorded the seminal LP Soul Sauce with Tjader. The single "Guachi Guaro" won a Grammy Award in 1965 and has recently enjoyed renewed popularity in both the London and Madrid Acid Jazz club scenes.

Although Peraza never desired nor welcomed the stress of being a bandleader in his own right, much preferring to be a featured performer, he did record one solo album in 1968. His Wild Thing LP on the Skye label, which was co-owned by Tjader, Gary McFarland and Gábor Szabó, features performances from pianist Chick Corea and Japanese saxophonist Sadao Watanabe and flautist Johnny Pacheco. He had previously been featured as a solo artist on the 1959 album More Drums on Fire. His performance on conga and bongos on the piece "Artistry in Rhythm" was widely lauded as a standard-setting masterpiece.

Adaptability and an open mind are the hallmarks of Peraza's approach, so that when Rock music took hold of the business in the late 60s, Armando was the first Afro-Cuban percussionist to add conga drums to a rock track, notably on Harvey Mandel's Cristo Redentor album in 1968.

In January 1972, at the age of 47, Peraza joined the Santana group [6], which was embarking on its most creative period and helped influence the band in melding the genres of Afro-Cuban, Jazz, Rock and Blues. Peraza remained with Carlos Santana for nearly twenty years and played to millions around the globe, partnering with other outstanding percussionists like José Areas, Mingo Lewis, Raul Rekow and Orestes Vilató. The profile of Afro-Cuban percussion had never been higher. While with the Santana band, Armando wrote and co-authored a total of 16 songs which were recorded by Santana. The best known is probably "Gitano" from the album Amigos (1976) and has Peraza singing the lyrics he wrote himself. His jazz-inflected piece "Mandela" was recorded on the album Freedom (1987). Santana's recordings featured many outstanding performances from Peraza, notably his conga solos on "Mother Africa" (Welcome 1973), "Hannibal" (Zebop 1981), "Bambele" and "Bambara" (both Viva Santana! 1988). Latin percussionist John Santos says that Peraza is "perhaps the greatest bongocero in the history of that instrument."

Peraza retired from Santana in 1990 at the age of 66, although he did travel to Santiago de Chile for a major concert with Santana in 1992 in front of a crowd in excess of 100,000.

As of the late 1990s through 2009 Peraza was in semi-retirement in San Francisco, California with Josephine, his wife and partner of more than 30 years. He continues to hold workshops and play selective engagements and Jazz festivals around the world.

In 2005 he appeared on a recording by Bay Area musician John Santos. Santos' 20th Anniversary set included the piece "El Changüí de Peraza", which highlighted Peraza's superb bongo playing. He returned to his native Cuba in 2002, his first trip to the island in more than 50 years and plans to return as many times as possible.

In July 2006, Peraza, at 82 years of age, made a rare appearance with the Santana Band for a three show performance at the Montreux Jazz Festival in Switzerland. This was the first of a number of summer live appearances. Later, in August 2006, Peraza appeared at the San José Jazz Festival in California, sitting in with the Julius Melendez Latin Jazz Ensemble, as well as giving a drum clinics throughout California with Raul Rekow and Karl Perazzo, both currently with Santana. Also in 2006, Peraza recorded with Bay Area pianist Rebeca Mauleon's album Descarga en California (Universal/Pimienta). He also co-wrote a tune on the album titled Cepeda Forever, honoring his longtime friend and baseball Hall of Famer Orlando Cepeda.

In January 2007, Peraza received a Lifetime Achievement Award from the Voices of Latin Rock. The tribute show was held at the historic Bimbo's nightclub in San Francisco, California and was attended by Carlos Santana, who presented Peraza with an award. Also attending and performing were members of the group Malo and a reunion of the original Santana band, with José Areas, Mike Carabello, Gregg Rolie and Michael Shrieve. Every January, The Voices of Latin Rock, present the "Armando Peraza" award for achievement in the San Francisco/Bay Area. In February 2010, Armando was interviewed in his home for Japanese television. In January 2011, the BBC from London came to interview Armando for a documentary they are filming on the music of Santana, specifically, the early to mid-1970s, when Armando first joined the band.

Peraza has a daughter Traci and three grandchildren: Adriel, Jalil and Jehireh. Armando's son-in-law, musician Tony Williams, is a talented writer, singer and composer, who is currently recording and performing with Kanye West. He died of pneumonia on April 14, 2014 at the age of 89.[7][8]

With Charles Kynard and Buddy Collette

This article uses material from the article Armando Peraza from the free encyclopedia Wikipedia and it is licensed under the GNU Free Documentation License.

Shaking & Turning Mayvie
Update Required To play the media you will need to either update your browser to a recent version or update your Flash plugin.