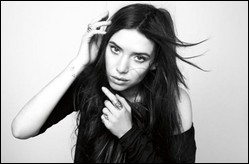 Li Lykke Timotej Svensson was born in Ystad, Skåne; her mother is a photographer and her father, a musician, is a member of Dag Vag.[3] The family moved to Stockholm when Zachrisson was a toddler and when she was six moved to a mountaintop in Portugal where they lived for five years. The family also spent time in Lisbon and Morocco, and winters in Nepal and India.[3][4] She moved to the neighborhood of Bushwick, Brooklyn in New York for three months when she was 19.[5][6][7] She returned when she was 21 to record her album.[8]

Lykke had some success with the EP "Little Bit" in 2007. Stereogum named her an artist to watch in October 2007 and described her music as a mix of soul, electro and "powdered-sugar pop".[9]

Lykke's debut album, Youth Novels, was released on LL Recordings in the Nordic region on 30 January 2008 and received a wider European release in June 2008. The album was produced by Björn Yttling of Peter Bjorn and John and Lasse Mårtén and was reportedly inspired by a previous relationship of three years.[10] It was released in the United States on 19 August 2008. The album was released in the UK in June 2008, promoted by a performances of "Little Bit" on Later... with Jools Holland on 25 May 2008.

Live, her performances were as startling as they were riveting: armed with a pared down drum kit, a necklace made out of percussive instruments, a guitar, a bass and a microphone, many were confounded by how much energy, emotion and heart came out of one very simple set-up. Youth Novels skyrocketed to the top of many of the years Best Of lists and saw Lykke Li sell out tours across the globe, including lauded sets at massive festivals such as Glastonbury Festival, Coachella Festival, Lollapalooza, also her appearances on Late Night with Conan OBrien.[11]

Lykke appeared on Last Call with Carson Daly on 18 February 2009. She covered "Knocked Up", originally recorded by Kings of Leon who had approached Lykke to cover a song of her choice, and "Gifted" in which she performs with Kanye West. Lykke performed at the 2009 Coachella Valley Music and Arts Festival on 19 April, as well as the 2009 Lollapalooza festival on 8 August as part of the promotional tour for Youth Novels.

A remixed version of her song "I'm Good, I'm Gone" was featured in the 2009 horror film Sorority Row.

The song "Possibility" was written for the 2009 film The Twilight Saga: New Moon. Lykke had been asked to write a song to the film soundtrack but she was reluctant to commit to the project. It was after she had seen an early screening of the film that she decided she wanted to contribute to the soundtrack. The soundtrack was released on 16 October 2009.

She collaborated with singer Kleerup on the song "Until We Bleed", which was featured on an episode of UK TV series Misfits and an episode of the television series Ringer.

Her second album Wounded Rhymes was released in 2011. The album was featured on several lists of 2011's best albums, including Q, Mojo, The Observer, The New York Times, The Huffington Post and Rolling Stone.[14]

The April 19th, 2011 episode of "Glee" (titled A Night of Neglect) featured student Tina singing a version of Lykke Li's "I Follow Rivers".

On 30 April 2011, she performed on Later... with Jools Holland in the UK, playing "Get Some", "Sadness Is a Blessing" and "I Follow Rivers". Lykke played at the 2011 Latitude Festival, held between 14 and 18 July 2011 at Henham Park in Suffolk, England. She appeared with her band on US late night talk show The Tonight Show with Jay Leno in August 2011 and on the Late Show with David Letterman in November 2011.

The Magician remix version of "I Follow Rivers" is featured in Jacques Audiard's 2012 film De rouille et d'os in competition at the Cannes festival.

Lykke Li contributed on the 2012 compilation "Volym 1" with the track "Come Near" released by the Swedish artist collective and record label INGRID where she's a founding member. She also contributed a cover of "Silver Springs" to a 2012 Fleetwood Mac tribute album, which also included renditions from the likes of Best Coast, Marianne Faithfull, and MGMT.[15] In 2013, she was featured as a guest musician on David Lynch's second studio album The Big Dream, performing vocals on the lead single "I'm Waiting Here".[16]

On March 4 2014, Lykke Li released the video for the single 'Love Me Like I'm Not Made of Stone' off her third studio album I Never Learn.[17]

In September 2010 she was announced as the official face of the Levi's Curve ID Collection, alongside Pixie Geldof and Miss Nine.[18] In January 2012 she signed with the Viva Model Management agency.[19]

After her debut album, Lykke was tagged as a "pop princess". But she disagreed that "in this day and age, suddenly pop music has this negative, fake and disgusting image." She cited Neil Young, The Shangri-Las, This Mortal Coil, The Beatles, and Rolling Stones as influences and said "they arent pop anymore by todays standards, but they were."[20]

In 2009 Lykke Li won an EBBA Award. Every year the European Border Breakers Awards (EBBA) recognize the success of ten emerging artists or groups who reached audiences outside their own countries with their first internationally released album in the past year.

This article uses material from the article Lykke Li from the free encyclopedia Wikipedia and it is licensed under the GNU Free Documentation License.

Culture Of Destruction Nubya
Update Required To play the media you will need to either update your browser to a recent version or update your Flash plugin.