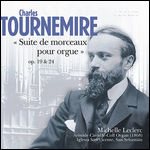 Charles Arnould Tournemire (22 January 1870 – 3 or 4 November 1939) was a French composer and organist, notable partly for his improvisations, which were often rooted in the music of Gregorian chant. His compositions include eight symphonies (one of them choral), four operas, twelve chamber works and eighteen piano solos; but today he is almost exclusively remembered for his organ music, and by far the best known piece from his pen is L'Orgue Mystique.

Born at Bordeaux, Tournemire moved in adolescence to Paris, and there became one of César Franck's three youngest students. (The other two were Henri Büsser and a Belgian, Guillaume Lekeu, the latter having been born only two days before Tournemire.)

From 1898 (on the resignation of Gabriel Pierné) to 1939, Tournemire served as the organiste titulaire at Franck's old church, the Basilique Ste-Clotilde, Paris. He was also professor of Chamber Music at the Paris Conservatoire. In 1931 he published a biography of Franck.

A year before the biography appeared, Tournemire recorded five organ improvisations, which were later transcribed by Maurice Duruflé from phonograph recordings. Of ten 78-rpm discs which Tournemire made in 1930, playing the Aristide Cavaillé-Coll organ of Sainte-Clotilde (Polydor 561047, 561048, 566057, 566058, 566059), five contain Franck compositions. This set of discs was awarded the Grand Prix du Disque on May 18, 1931, and has been reissued on both LP and CD.

Insofar as Tournemire's name is now remembered, it is usually spoken of in connection with his biggest composition: L'orgue Mystique, a group of 51 sets of five pieces each (except for Holy Saturday, which contains only three pieces), all written between 1927 and 1932. This collection covers the cycle of the Roman Catholic liturgical year, each set being based on the Gregorian chants for the day. Unlike the symphonies of Charles-Marie Widor, which are usually heard in secular recitals (even when individual movements of these symphonies had liturgical origins, as they sometimes did), L'Orgue Mystique was designed through and through for church use.

Tournemire died at Arcachon in 1939. The precise cause of his death is uncertain, as is the exact date (3 or 4 November).

This article uses material from the article Charles Tournemire from the free encyclopedia Wikipedia and it is licensed under the GNU Free Documentation License.