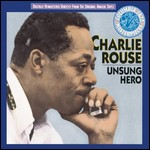 Charlie Rouse (April 6, 1924 – November 30, 1988) was an American hard bop tenor saxophonist and flautist. His career is marked by his collaboration with Thelonious Monk, which lasted for more than ten years.[1]

Rouse was born in Washington, DC in 1924. At first he worked with the clarinet, before turning to the saxophone.

Rouse began his career with the Billy Eckstine Orchestra in 1944, followed by the Dizzy Gillespie Big Band in 1945, the Duke Ellington Orchestra from 1949 to 1950, the Count Basie Octet in 1950, Bull Moose Jackson And His Buffalo Bearcats in 1953, and the Oscar Pettiford Sextet in 1955. He made his recording debut with Tadd Dameron in 1947,[2] and in 1957 made a notable album with Paul Quinichette.[3]

Charlie Rouse died from lung cancer on November 30, 1988 at University Hospital in Seattle at the age of 64.

The asteroid 10426 Charlierouse was officially named to honor Rouse by American astronomer Joe Montani of Spacewatch, who discovered it in 1999.[4][5] Earlier, in 1994, asteroid 11091 Thelonious had also been discovered and named by Montani.[4]

This article uses material from the article Charlie Rouse from the free encyclopedia Wikipedia and it is licensed under the GNU Free Documentation License.

Streets Of London Ralph McTell
Update Required To play the media you will need to either update your browser to a recent version or update your Flash plugin.