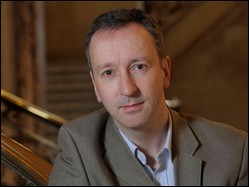 Paul Agnew (born 1964 in Glasgow) is a Scottish operatic tenor.

Agnew read music as a Choral Scholar at Magdalen College, Oxford. He became associated with the Consort of Musicke, the Tallis Scholars, the Sixteen and the Gothic Voices, before embarking on a solo career in the early 1990s.

Closely associated with William Christie and Les Arts Florissants, Paul Agnew has performed the roles of Jason in Charpentier's Médée and of Hippolyte in Rameau's Hippolyte et Aricie, as well as appearing on the recordings of La descente d'Orphée aux enfers and Les plaisirs de Versailles, both by Marc-Antoine Charpentier; Acis and Galatea by George Frideric Handel, and Rameau's Grands Motets (Gramophone's Best Early Music Vocal award in 1995). In 2007 Agnew conducted Les Arts Florissants in a performance of Antonio Vivaldi. He was the first person other than William Christie to conduct the ensemble. He has since combined his conducting and singing careers.

This article uses material from the article Paul Agnew from the free encyclopedia Wikipedia and it is licensed under the GNU Free Documentation License.

Nine To Five Heinrich Mueller
Update Required To play the media you will need to either update your browser to a recent version or update your Flash plugin.