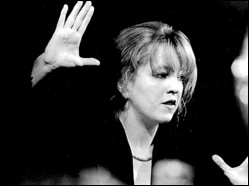 Maria Schneider (born November 27, 1960 in Windom, Minnesota) is an American arranger, composer, and big-band leader who has won multiple awards. Her 2004 album Concert in the Garden won the Grammy award for "Best Large Jazz Ensemble Album."[1]

She studied music theory and composition at the University of Minnesota, graduating in 1983, then earned a Masters of Music in 1985 from the Eastman School of Music, studying for one year as well at the University of Miami. Upon leaving Eastman, Gil Evans hired her as his copyist, and she collaborated with him for the next several years, producing arrangements commissioned by Sting and scoring the films The Color of Money and Absolute Beginners. Schneider went on to study with Bob Brookmeyer from 1986 to 1991, as she concurrently worked as a freelance arranger in New York.

She formed The Maria Schneider Jazz Orchestra in 1993, appearing weekly at Visiones in Greenwich Village for five years. Her orchestra has also performed at many jazz festivals and toured Europe.

in 2004, Schneider was one of the first artists to use ArtistShare to produce an album.[2] "The Maria Schneider Orchestra" released Sky Blue, in July 2007, also via ArtistShare.

Schneider is an avid birdwatcher and enlisted band members to contribute bird calls on "Cerulean Skies" when recording Sky Blue.

This article uses material from the article Maria Schneider (musician) from the free encyclopedia Wikipedia and it is licensed under the GNU Free Documentation License.