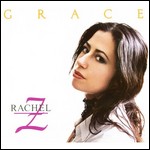 Rachel Carmel Nicolazzo, better known as Rachel Z, and now Rachel Z Hakim, is a jazz and rock pianist and keyboardist and is considered one of the most influential and versatile musical forces of her generation. She trailblazed a top-level sideman career on keyboards while also recording 10 solo albums as a jazz musician.[1]

In 1988–1996 She played keyboards and piano with fusion band Steps Ahead with leader and legendary vibes player Mike Mainieri.

In 1995 she worked with Wayne Shorter, on his album High Life, which won a Grammy for Best Contemporary Jazz Album. She was responsible for the CD's 40 tracks of synthesized orchestral sounds, acoustic piano solos and several concurrent world tours. She worked closely on preproduction with Marcus Miller in the studio to mesh the synth orchestra with the live ensemble to create the unique and innovative soundscape.[1]

While signed to Columbia by Dr George Butler, she released an influential CD, Trust the Universe, which was unique in featuring a jazz A side with Charnette Moffett and Al Foster and an electric jazz B side with Lenny White and Victor Bailey.

In 1997 she recorded her next solo CD, Room of One's Own – A Tribute to Women Artistsfeatured arrangements by Maria Schneider and Alvaro Cordero. Many prominent female instrumentalists were featured such as Regina Carter Terri Lyne Carrington and Tracy Wormworth. Room won 4 stars in Down Beat and extensive critical acclaim for the original compositions and wind ensemble arrangements.

In 1999 Rachel Z was a part of a jazz fusion project by Stanley Clarke and Lenny White. The effort, simply called Vertú, featured such artists as Karen Briggs on violin, Richie Kotzen on guitar.

In 2002, she created a tribute to Joni Mitchell called Moon at the Window.

Intermittently, Rachel Z experimented with her own rock group Peacebox as a vocalist. During this time she was also working with the Neapolitan Italian pop legend Pino Daniele, with whom she first began working in 1996 and toured with until his death in 2016.

She also toured with Peter Gabriel during his Growing Up tours from 2002 to 2006, which gave Rachel the opportunity to widen her fan base and work with bassist Tony Levin. Her project, titled Dept. of Good and Evil on Savoy received a very successful reception.

In a 2005 column in The Guardian, John Fordham described her as "an improviser whose spontaneous playing is by no means eclipsed by the work of presiding geniuses such as Herbie Hancock and McCoy Tyner."

In 2013–14 Rachel Z recorded and toured as additional synth for The Omar Hakim Experience. She played synth with Wayne Escofferey for his US and Euro tour of 2014 release of Live at Firehouse 12. She toured with Terri Lyne Carrington in 2014 for the Mosaictour and recorded on the 2015 release of Mosaic 2 "Love and Soul" on Concords Records.

In 2015, Rachel Z joined Neal Schon Vortex to open for the rock band Journey for 17 gigs in Canada. She added an electronica,/jazz edge to his music that has been critically acclaimed and has intrigued and captured new fans.

The OZ Experience (Omar and Rachel Z) are currently working on their second release in their studio and plan to release the project in 2017. The group currently features Jon Toscano on bass & Sandro Albert kn guitar. The band performs Improvised EDM electronica jazz funk rock.

Rachel Z, a graduate of New England Conservatory of Music, is a Professor at the College for the Performing Arts New School University (Jazz and Contemporary Music Studies) since 2000.

This article uses material from the article Rachel Z from the free encyclopedia Wikipedia and it is licensed under the GNU Free Documentation License.

Bombay 77 Bombay Street
Update Required To play the media you will need to either update your browser to a recent version or update your Flash plugin.