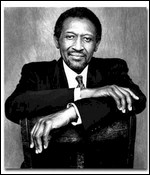 Hicks was born in Atlanta, Georgia. As a child, he moved with his family around the United States, as his father took up jobs with the Methodist church.[2] He began playing the piano aged seven; his development accelerated once his family moved to St. Louis, when Hicks was 14.[2] He studied music at Lincoln University in Missouri and Berklee School of Music in Boston before moving to New York in 1963, where he soon found employment with blues singer Big Maybelle.[2]

From 1983, the flautist Elise Wood was regularly a member of his groups. The couple married in 2001. Wood survives him, and has led groups dedicated to his music.[4]

This article uses material from the article John Hicks (jazz pianist) from the free encyclopedia Wikipedia and it is licensed under the GNU Free Documentation License.

Matador Garland Jeffreys
Update Required To play the media you will need to either update your browser to a recent version or update your Flash plugin.