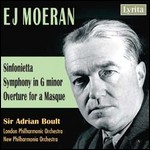 Ernest John Moeran (31 December 18941 December 1950) was an English composer who had strong associations with Ireland (his father was Irish, he spent much of his life there, and he died there).

Moeran was born in Heston (now in the London Borough of Hounslow), the son of the Rev Joseph William W Moeran, an Irish born clergyman, and his wife Ada Esther (born Whall). The family moved around for several years as his father was appointed to various parishes but they eventually settled in Bacton, on the coast of Norfolk.

Moeran studied the violin and the piano as a child. He was educated from an early age at home, by a governess. At the age of ten, he was sent to Suffield Park Preparatory School in Cromer, North Norfolk. In 1908, he was enrolled at Uppingham School where he spent the next five years. He was taught music by the director Robert Sterndale Bennett (grandson of Sir William Sterndale Bennett), who greatly encouraged his talents. On leaving Uppingham in 1913, he studied piano and composition at the Royal College of Music with Charles Villiers Stanford. He was also a member of the prestigious Oxford & Cambridge Musical Club.[1]

Moeran spent most of World War I as a despatch rider but this ended when he was wounded at Bullecourt in 1917. After recovering from his injuries, he did not return to the front.

After the war he returned for a few months to Uppingham School, where he was employed as a teacher of music. This role did not satisfy him and he returned to the Royal College of Music to resume his composition studies, now with John Ireland, who had been a pupil of Moeran's earlier teacher Charles Villiers Stanford.

His first mature compositions, songs and chamber music, date from this time. He also began collecting and arranging folk music of Norfolk and other regions. He collected about 150 folk songs in Norfolk and Suffolk. His preferred method was to sit in a country pub and wait until an old man started singing. He noted the song down and then asked for more. According to the biography The Music of E. J. Moeran by Geoffrey Self (1986), he spent time living with gypsies, but no further details are available. He spent some time after the war living at Kington, Herefordshire.

By the mid-1920s, Moeran had become close friends with Peter Warlock and they lived for some years in Eynsford, Kent, notorious among the locals for their frequent drunken revelry. For the rest of his life, Moeran had problems with alcohol, later joined by mental instability. After Warlock's death in 1930, he became interested in his Irish roots and began spending much of his time in Kenmare, County Kerry.

As a person, E. J. Moeran was greatly influenced by a number of people. However, it was the time spent with Peter Warlock in Eynsford that had the greatest impact on his life. While Warlock was seemingly capable of drinking alcohol to excess without any apparent long-term effects, Moeran developed a dependency which handicapped him for the remainder of his life. His later problems have been attributed to his war wound to the head, but this is incorrect. By 1930, Moeran had become an alcoholic.

Although English and middle-class, Moeran was at ease in a bar surrounded by local characters from local farms. Indeed, until 2007, "Moeran's Bar" at the hotel in Kenmare where he lived was named after him. He was looked on with affection by all who knew him, and his gauche, bumbling personality belied a very sharp-witted character who was quick to learn and take up new approaches to music. He also had an encyclopaedic knowledge of trains and train timetables.

He married the cellist Peers Coetmore on 26 July 1945.[2] Although the marriage was not entirely happy it inspired two of Moeran's finest late works, the Cello Concerto and Cello Sonata.

He died suddenly, probably from a cerebral haemorrhage, in Kenmare at the age of 55. He was found in the Kenmare River and it was at first assumed he had drowned. However, an inquest later established that he had died before falling into the water.

Moeran came late in the canon of last major English composers heavily influenced by English folk-song and thus belongs to the lyrical tradition of such composers as Delius, Vaughan Williams and Ireland. The influence of the nature and landscapes of Norfolk and Ireland are also often evident in his music. Some of his larger-scale orchestral pieces were composed (or at least conceived) whilst Moeran walked the hills of western England, particularly in Herefordshire, and Ireland, where the grandness of the mountain ranges of Kerry inspired him greatly. But, unlike some now-forgotten English "pastoralist" composers, Moeran was capable of conveying a wide range of emotions through his music and wasn't afraid of writing in a darker and harsher idiom when it suited him. His style is conservative but not derivative.

By Moeran's time, however, such a style was already seen as somewhat dated and he never made a big breakthrough as a composer despite the success of the sombre, Sibelian Symphony in G minor (1934-1937), generally regarded as his masterpiece. The Symphony stands along with the Symphony No. 1 of Sir William Walton as one of the two tightest and most controlled symphonies emanating from the British Isles of the inter-war era. The Moeran work demonstrates a robust sonata form in the first movement, along with a questioning harmonic structure, which, on first examination, may appear orthodox, but which on deeper analysis indicates the dichotomy of the interval of the fifth (which is European diatonic), with the interval of the fourth, which is both the completion of the European fifth, but also introduces the Irish dimension, in which the fourth can be the predominant interval.

Though he first received favourable critical attention for his chamber music and continued to compose significant works in this genre, his greatest achievements in general are to be found among his few large-scale orchestral works, including a Violin Concerto, Cello Concerto, Sinfonietta and Serenade.

Moeran was very interested in "folk" music and utilised an extensive collection of songs that he had notated in Norfolk pubs as part of his creative material. He also made great use of Irish music. The Norfolk material can be sensed in the piano works of the early 1920s. The Irish influence is seen within the second movement of the Violin Concerto (Puck Fair at Killorglin?), and even more so in the second movement of the String Quartet in E-flat, as well as in the Cello Concerto, in which fragments of Irish music, in particular "The star of County Down" (also used by Vaughan Williams in his Five Variants of Dives and Lazarus), are evident.

Another facet to the music of Moeran is the madrigal. He once stated to a friend that if he were ever arrested and thus forced to state his profession, he would have to say it was that of being a madrigalist. Moeran was capable of staggering harmonic invention whilst working within the madrigal form - in "Spring the Sweet Spring" the harmonies progress from those of the madrigal into harmonies of a jazz style reminiscent of Duke Ellington; full of contradictions and added-note chords. The Serenade, an orchestral work, evinces madrigalist harmony re-worked by Moeran into an astringent style in which acerbic tonal and harmonic patterns are grafted onto the madrigalist basis to produce music of outstanding freshness and originality that surely places Moeran into the genre of inventive twentieth-century music, rather than into the "English Pastoral School", which, in itself, is arguably a misnomer.

Although he was not by any means a prolific church composer, his Services in D and E-flat are still performed today.

Recently, there has been more interest in and many recordings of Moeran's works, but many of them, such as the songs to poems by A. E. Housman and James Joyce, still remain relatively unknown.

Over 40 of his manuscripts, including that of his unfinished Second Symphony in E-flat, were bequeathed by his widow Peers Coetmore to the Victorian College of the Arts, now part of the University of Melbourne.[3]

Conductor Martin Yates has realised and completed the Symphony No. 2 from sketches. A recording of the work with Yates conducting the Royal Scottish National Orchestra was released in October 2011 on the Dutton Epoch label (together with the early Overture based on the G major Symphony, and Yates' own orchestration of Sarnia by John Ireland).

This article uses material from the article Ernest John Moeran from the free encyclopedia Wikipedia and it is licensed under the GNU Free Documentation License.

Insieme noi Galliardo
Update Required To play the media you will need to either update your browser to a recent version or update your Flash plugin.