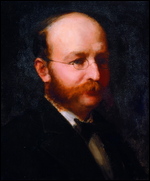 He studied organ, orchestration, and composition in Germany and toured in Europe for three years. After returning to the US and settling in Boston in 1861, he became a member of the faculty of Harvard, a post that he retained for many years. He was one of the dominant musical figures on the musical scene in Boston and together with a group of other composers collectively known as the Boston Six, Paine was one of those responsible for the first significant body of concert music by composers from the United States. The other five were George Chadwick, Horatio Parker, Arthur Foote, Edward MacDowell, and Amy Beach.

In 1889, he made one of the first musical recordings on wax cylinder with Theo Wangemann, who was experimenting with sound recording on the newly invented phonograph.[1]

The Grove Music Encyclopedia says of him:

Paine served the Harvard community for 43 years. By his presence and by his serious concern with music in a liberal arts college he awakened a regard for music among many generations of Harvard men. His writings testify to his insistence upon the place of music within the liberal arts [2]

This article uses material from the article John Knowles Paine from the free encyclopedia Wikipedia and it is licensed under the GNU Free Documentation License.