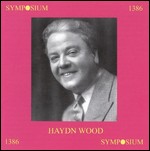 Haydn Wood was born in the Yorkshire town of Slaithwaite on 25 March 1882. When he was three years old his family moved to the Isle of Man, an island which was often a source of inspiration for the composer.

In 1897, at the Royal College of Music, he studied violin with Enrique Fernández Arbós and composition with Charles Villiers Stanford.

In 1901, he was soloist at a special concert commemorating the opening of the Royal College of Music's Concert Hall. The concert was attended by Joseph Joachim (who had heard him play before) and Pablo de Sarasate. They were so impressed that they sent him to Brussels for study with the renowned teacher César Thomson.[1] He then embarked on a world tour, accompanying the Canadian soprano Dame Emma Albani, and they continued their association for a further eight years.[1]

From 1913 to 1926, he toured extensively with the soprano Dorothy Court whom he married in 1909. He also gained considerable success from his works, particularly his songs. From 1939, he served as a director of the Performing Right Society.

On the occasion of his 70th birthday he was given a full concert dedicated to his music by the BBC. He died in a London nursing home on 11 March 1959, two weeks before his 77th birthday.

Haydn Wood was a prolific composer of orchestral music, including 15 suites, 9 rhapsodies, 8 overtures, 3 concertante pieces and nearly 50 other assorted works, including 180 individual songs.

His orchestral pieces were primarily of the "light music" style; a well known piece of his is the three-movement Fantasy-Concerto. Another is his London Landmarks Suite, particularly "Horse Guards, Whitehall". In 1916, he composed the popular song "Roses of Picardy" for his wife. After a time writing popular music, Wood began to write musical comedy; his best-known piece of this genre is the musical play Tina.

The tone poem Mannin Veen (Manx for "Dear Isle of Man") was based on four Manx folk tunes, and is one of two works written originally for wind band by Wood. The work is also occasionally performed in its orchestral version.

This article uses material from the article Haydn Wood from the free encyclopedia Wikipedia and it is licensed under the GNU Free Documentation License.

The Art Of Growing Old Redwood
Update Required To play the media you will need to either update your browser to a recent version or update your Flash plugin.