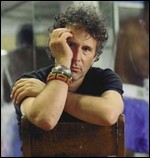 Marc Wallace Jordan (born 1948), is an American-born Canadian singer-songwriter, record producer, session musician, and actor. Covering a wide variety of genres, he has written songs for a number of well-known artists, including Diana Ross, Rod Stewart, Cher, Bette Midler, and Josh Groban. He was named best producer with Steven MacKinnon at the Juno Awards in 1994 for "Waiting For A Miracle" from Reckless Valentine. In early 2014, Marc Jordan was named Songwriting Chair at Norman Jewison's Canadian Film Centre.

Born in Brooklyn, New York, the son of Canadian singer Charles Jordan, Marc Jordan grew up in a musical household in Toronto after his father returned to Canada. He studied film at Brock University, but soon turned to music, first coming to public attention as a guitarist for Bobby Vee.

With the Canadian division of CBS Records, Jordan released some singles in 1974, which included titles including "It's a Fine Line", "New York Kids", "Original Sin"). They were not very successful themselves, but they impressed American music producer Gary Katz, and in 1977 Jordan reached a U.S. deal with Warner Bros. Records.[1] This period with Warner spawned the Canadian hit songs "Marina del Rey" and "Survival" from the record Mannequin; a second record produced by Jay Graydon and called Blue Desert was released 1980. This recording is a classic of the West Coast Sound of the period.

In the 1980s, Jordan was signed to RCA for two records. Paul De Villiers produced the first, Talking Through Pictures, and Kim Bullard the second, called C.O.W.. In 1988, Jordan sang and co-wrote the theme song to the hit Australian movie Boulevard of Broken Dreams which was nominated for an AFI Award for Best Film.

In 1994, Jordan won a Juno Award for "Producer of the Year" (along with co-producer Steven MacKinnon) for "Waiting for a Miracle" from his Reckless Valentine album.

After independently releasing the critically acclaimed recordings Reckless Valentine and Cool Jam Black Earth, he was signed to Blue Note/EMI Canada in 1999, and followed up with two more jazz-oriented CDs, This Is How Men Cry and Make Believe Ballroom.

Currently, Jordan performs with Murray McLauchlan, Cindy Church and Ian Thomas in the group Lunch At Allen's. He is married to fellow singer-songwriter Amy Sky. They live in Toronto and have a cottage in Muskoka with their two children, Ezra and Zoe. Jordan and Sky are both national UNICEF Goodwill Ambassadors for Canada.

Jordan made his acting debut in Michael McGowan's 2010 sports musical Score: A Hockey Musical, where he plays Edgar Gordon, a pacifist father who along with his wife (Olivia Newton-John) have a 17-year-old son who has a talent for hockey.

In answer to the demand from fans worldwide -- particularly in the UK, Netherlands, Italy, Spain and Japan -- many of his older recordings have also been re-released and are available on Marc Jordan's website.

This is How Men Cry

First released in Canada by Blue Note/EMI on October 25, 1999, This is How Men Cry contains six tracks written by Jordan: "This Is How Men Cry," "Charlie Parker Loves Me" (covered by Rod Stewart on his album Human, released February 6, 2001), "Slow Bombing the World," "I Must Have Left My Heart," "Let's Get Lost," and "London in the Rain". There are an additional three covers: Willie Nelson's '"Crazy," Elvis Costello's "Almost Blue," and Mann Curtis's "Let it be Me." The lead track, "This is How Men Cry," is a poem about how men communicate, or more often how they don't.[2]

Marc Jordon is married to Amy Sky and they have two children together, a son, Ezra and a daughter, Zoe.

A list of artists who have performed songs written by Jordan include the following:

This article uses material from the article Marc Jordan from the free encyclopedia Wikipedia and it is licensed under the GNU Free Documentation License.

Let's Work It Out Texas
Update Required To play the media you will need to either update your browser to a recent version or update your Flash plugin.