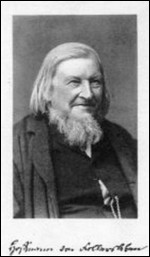 ' (2 April 1798 19 January 1874), who used Hoffmann von Fallersleben' as his pen name, was a German poet. He is best known for writing "Das Lied der Deutschen", its third stanza now being the national anthem of Germany, and a number of popular children's songs.

Hoffmann was born in Fallersleben (in present-day Wolfsburg), Brunswick-Lüneburg, then part of the Holy Roman Empire.

The son of a merchant and Mayor of his native city, he was educated at the classical schools of Helmstedt and Braunschweig, and afterwards at the universities of Göttingen and Bonn. His original intention was to study theology, but he soon devoted himself entirely to literature. In 1823 he was appointed custodian of the university library at Breslau, a post which he held till 1838. He was also made extraordinary professor of the German language and literature at that university in 1830, and ordinary professor in 1835. Hoffmann was deprived of his chair in 1842 in consequence of his Unpolitische Lieder (1840-1841, "Unpolitical Songs"), which gave much offence to the authorities in Prussia.

During his exile, he traveled in Germany, Switzerland and Italy, and lived for two or three years in Mecklenburg, of which he became a naturalized citizen. After the revolution of 1848 he was enabled to return to Prussia, where he was restored to his rights, and received the salary attached to a promised office not yet vacant. He married in 1849, and during the next ten years lived first in Bingerbrück, afterwards in Neuwied, and then in Weimar, where together with Oskar Schade (1826-1906) he edited the Weimarische Jahrbuch (1854-1857).

In 1860 he was appointed librarian to Victor I, Duke of Ratibor at the monasterial castle of Corvey near Höxter on the Weser, where he died in 1874.[1]

Hoffmann von Fallersleben was one of the most popular poets of the modern Germany. In politics he ardently sympathized with the progressive tendencies of his time, and he was among the earliest and most effective of the political poets who prepared the way for the outbreak of 1848. As a poet, however, he acquired distinction chiefly by the ease, simplicity and grace with which he gave expression to the passions and aspirations of daily life. Although he had not been scientifically trained in music, he composed melodies for many of his songs, and a considerable number of them are sung by all classes in every part of Germany.

Among the best known is the patriotic "Das Lied der Deutschen" which starts with the words Deutschland, Deutschland über alles and is set to a 1797 tune by Joseph Haydn. The lyrics were written in 1841 on the island of Helgoland, then in British possession.[2] The text of the song expresses the pan-German sentiments common in revolutionary republicans of the period and were highly inflammatory in the princedoms of the German-speaking world. This sentiment was, of course, considered high treason. The phrase über alles did not refer to militant ideas of conquest of foreign countries, but to the need for loyalty to a united Germany to replace all other regional loyalties.

The best of his poetical writings is his Gedichte ("Poems", 1827), but there is great merit also in his

His Unpolitische Lieder, Deutsche Lieder aus der Schweiz ("German Songs from Switzerland") and Streiflichter ("Highlights") are not without poetical value, but they are mainly interesting in relation to the movements of the age in which they were written.

As a student of ancient Teutonic literature, Hoffmann von Fallersleben ranks among the most persevering and cultivated of German scholars, some of the chief results of his labors being embodied in his Horae Belgicae, Fundgruben für Geschichte deutscher Sprache und Literatur ("Sources for the History of German Language and Literature"), Altdeutsche Blätter ("Old German Papers"), Spenden zur deutschen Literaturgeschichte und Findlinge.

Among his editions of particular works may be named

Die deutsche Philologie im Grundriss ("Fundamentals of German Philology", 1836) was at the time of its publication a valuable contribution to philological research, and historians of German literature still attach importance to his

This article uses material from the article August Heinrich Hoffmann von Fallersleben from the free encyclopedia Wikipedia and it is licensed under the GNU Free Documentation License.

Action Pearlbreakers
Update Required To play the media you will need to either update your browser to a recent version or update your Flash plugin.