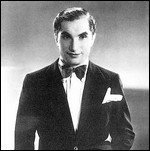 Joseph Schmidt (March 4, 1904 November 16, 1942) was an Austro-Hungarian and Romanian[1][2][3] Jewish tenor and actor. He was born in Davideny (Ukrainian: Davydivka) village in the Storozhynets district of the Bukovina province of Austria-Hungary, which became part of Romania after World War I and is now part of Ukraine.

In addition to German, which was his first language,[4] and Yiddish, he learned Hebrew and became fluent in Romanian, French and English. His first vocal training was as a boy alto in the Czernowitz Synagogue. His talents were quickly recognised and by 1924 he was featured in his first solo recital in Czernowitz singing traditional Jewish songs and arias by Verdi, Puccini, Rossini and Bizet. Soon he moved to Berlin and took piano and singing lessons from Professor Hermann Weissenborn at the Königliche Musikschule. He returned to Romania for his military service.

In 1929, he went back to Berlin, where Cornelis Bronsgeest, a famous Dutch baritone, engaged him for a radio broadcast as Vasco da Gama in Meyerbeer's L'Africaine. This was the beginning of a successful international career. Owing to his diminutive stature (he was just over 1.5 m, or 4' 11") a stage career was impossible; however his voice was extremely well suited for radio. He made many records, first for Ultraphone, then for Odeon/Parlophone, was featured in many radio broadcasts and acted in several movies in both German and English.

Ironically, Joseph Schmidt enjoyed his greatest successes during the rise of the German Nazis, who subsequently prohibited Jewish artists and writers from working. In 1937, he toured the United States and performed in Carnegie Hall together with other prominent singers such as Grace Moore. He was still very much welcome in the Netherlands and Belgium, where he was immensely popular.

In 1939, he visited his mother in Czernowitz for the last time. When the war broke out that year he was caught in France by the German invasion. He attempted to escape to Cuba but, unfortunately, this failed. After making a dash for the Swiss border, he was interned in a Swiss refugee camp in Girenbad near Zürich in October 1942. He had already been in frail health, and was treated for a throat infection at the local hospital. Schmidt had complained of chest pains, but for some reason this was dismissed and he was discharged on 14 November 1942.

Just two days later, on November 16, 1942, while attempting to recover at the nearby Waldegg inn, the famous singer collapsed. The hostess let him rest on her couch, but not long after, she noticed that he was no longer breathing. Schmidt had suffered a heart attack. He was only 38 years old. The following day, a work permit was issued, so he would have been able to move freely within Switzerland.

A plaque is mounted at the inn where he died.

He had a sweet lyric tenor voice with an easy high register, sailing up even to a high D. His voice was also agile, and he possessed a perfect and dependable trill, which he demonstrated on his recordings of "Ah si ben mio" from Il trovatore and "Una furtive lagrima" from L'elisir d'amore. His warm timbre was perfectly suited for the melodies of Schubert and Lehár. His popular song recordings were the best-sellers of that age.

The most thorough Discography of the tenor is that of Hansfried Sieben, published in the quarterly journal 'The Record Collector' (Chelmsford, Essex) for June 2000.

This article uses material from the article Joseph Schmidt from the free encyclopedia Wikipedia and it is licensed under the GNU Free Documentation License.