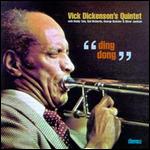 Born in Xenia, Ohio, in 1906, Dickenson wanted to be a plasterer like his father, but he abandoned the idea after injuring himself by falling off a ladder. [1] He studied organ from 1922, then changed to performing trombone with local bands. He made his recording debut in December 1930 as a vocalist with Luis Russell's band. He joined Blanche Calloway's orchestra in the early 1930s. He led his own groups both on the east and west coast between 1947 and the mid-1950s.

From then he was a session man. He appeared on the television program The Sound of Jazz in 1957 with Count Basie, Coleman Hawkins, Roy Eldridge, Gerry Mulligan, and Billie Holiday. He also recorded as a sideman with Jimmy Rushing (on Vanguard Records), Coleman Hawkins (Capitol and Prestige Records), Pee Wee Russell (Black Lion), Benny Carter (Bluebird and Black & Blue), Lester Young (Blue Note and Verve), Count Basie (Columbia and Pablo), Sidney Bechet (Bluebird, Black & Blue, and Blue Note). In 1953, he recorded The Vic Dickenson Showcase for Vanguard with Ed Hall on clarinet and Ruby Braff on trumpet. In 1958, Sydney Bechet made him come to France and play record at Brussel exposal.

Dickenson was a member of "The World's Greatest Jazz Band", the house band at The Roosevelt Grill in New York City.[2] He also performed at the same venue in a smaller group that featured him alongside trumpeter Bobby Hackett.

Dickenson is in Art Kane's photograph, A Great Day in Harlem, which includes trombonist Miff Mole.

For all his lively musical talent, Dickenson was a laconic man who often liked to be alone between sets. During his long association with bands at Eddie Condon's, he would often retire to a single chair that sat in a small alcove outside the men's room, instead of gathering with fellow musicians in the band room. When men mistook him for the men's room attendant and offered him money, he took it.

This article uses material from the article Vic Dickenson from the free encyclopedia Wikipedia and it is licensed under the GNU Free Documentation License.

Rough Boy ZZ Top
Update Required To play the media you will need to either update your browser to a recent version or update your Flash plugin.