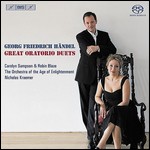 Robin Blaze (born 1971 in Manchester) is an English countertenor.

The son of a professional golfer Peter, Robin Blaze grew up in Shadwell, near Leeds, and was educated at Leeds Grammar School, Uppingham School, and Magdalen College, Oxford. Having made his first solo recordings as a treble with Stephen Lomas, Blaze was both a chorister and an academical clerk at Magdalen College where he recorded with the Dufay Consort. After graduating, he won a scholarship for postgraduate studies at the Royal College of Music, where he continued to study with Michael Chance and Ashley Stafford. After completing his education, he took a position as professor of Vocal Studies at the Royal College. He has also studied flute, piano, and organ.

His opera roles have included:

Blaze works regularly with pianist Graham Johnson and lutenist Elizabeth Kenny. He is involved in the project Dieterich Buxtehude Opera Omnia of Ton Koopman and the Amsterdam Baroque Orchestra & Choir to record the complete works of Dieterich Buxtehude.

Blaze has made over 50 solo recordings, including the complete Bach cantata series for Masaaki Suzuki for BIS, and a series of song recitals with Elizabeth Kenny for Hyperion. His CD of Handel duets with Carolyn Sampson was nominated for a Gramophone Award, and his recording of Thomas Adès' "Lover in Winter" won the Gramophone contemporary music recording prize. Other award winning recordings include Byrd consort songs with Concordia and Handel's Choice of Hercules with The King's Consort, both for Hyperion Records.

This article uses material from the article Robin Blaze from the free encyclopedia Wikipedia and it is licensed under the GNU Free Documentation License.

Low Pat Burgener
Update Required To play the media you will need to either update your browser to a recent version or update your Flash plugin.