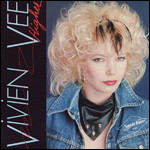 Viviana Andreattini (born May 2, 1960), known under the stage name of Vivien Vee, is a retired Italian singer.

Born in Trieste, Vee debuted in 1979 as an electronic disco project produced by Claudio Simonetti and Giancarlo Meo.[1][2]

Her song "Give Me a Break" became a minor hit in the American dance charts.[3] Another song of hers, "Remember", was featured in the 2005 video game The Warriors.[4] She released her last single in 1989.

Between 1982 and 1984, she posed semi-nude in men's magazines such as Playmen, Blitz, and the Italian edition of Playboy.

This article uses material from the article Vivien Vee from the free encyclopedia Wikipedia and it is licensed under the GNU Free Documentation License.

Jetz mit Dir Oliver Blessinger
Update Required To play the media you will need to either update your browser to a recent version or update your Flash plugin.