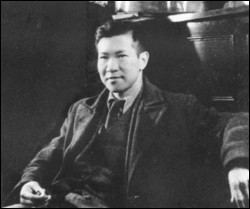 Xian Xinghai (June 13, 1905 – October 30, 1945) (Chinese: ; pinyin: Xin Xnghi) was one of the earliest generation of Chinese composers influenced by western classical music and has influenced generations of Chinese musicians.[1] Although he composed in all the major musical forms (two symphonies, a violin concerto, four large scale choral works, nearly 300 songs and an opera), he is best known for his Yellow River Cantata upon which the Yellow River Concerto for piano and orchestra is based.

Xian Xinghai, with family heritage from Panyu, Guangdong Province (Canton),[2][3] was born in Macau in 1905.[4] He moved frequently in his early life with his mother as his father had died before Xian was born.[2] Xian Xinghai moved with his mother to Singapore when he was six years old, he was enrolled in Yangzheng Primary School [1] for his primary education. It was while at Yangzheng Primary School that he took his first step into his musical career. His teacher, Ou Jianfu, first noticed Xian Xinghai's musical talent, and he was enrolled into the school's military band. Xian Xinghai received training in both musical instruments as well as music. He was later brought to Guangzhou for further education by his then school principal, Mr Lin Yao Xiang, along with 19 other students. Xian Xinghai started learning the clarinet in 1918 at the YMCA charity school attached to the Lingnan University in Guangzhou (Canton). In 1926 he joined the National Music Institute at Peking University to study music and in 1928 he entered National Shanghai Conservatory of Music to study violin and piano. The same year he published his well-known essay The Universal Music. In 1929 he went to Paris (where he met Ma Sicong who introduced him to many artists there) and was disliked by his teacher first because he didn't know how to play piano but one night he got home and was mad and composed a song which the teacher heard.The teacher came inside and was fascinated with his work and asked him to bring his piece of work to the university where the composers competed there work and he won and he was accepted to that music school .In 1934 he was the first Chinese student admitted to the Paris Conservatory to study senior composition[2] with both Vincent D'Indy and Paul Dukas.[3] During this period he composed Wind, Song of a Wanderer, Violin Sonata in D Minor, and other works.

Xian returned to China in 1935 to the Japanese occupation of the northeastern part of the country (known then as Manchuria).[3] Using his music as a weapon to protest the occupation, he took part in patriotic activities.[3] During the Sino-Japanese War (1937-1945), he wrote vocal works that encouraged the people to fight the Japanese invaders, including Saving the Nation, Non-Resistance the Only Fear, Song of Guerrillas, The Roads Are Opened by Us, The Vast Siberia, Children of the Motherland, Go to the Homefront of the Enemy, and On the Taihang Mountains, among others. He worked for film studios before going to the Communist headquarters in Yan'an, where he became dean of the Music Department at Lu Xun Institute of Arts in 1938. It is at this time that he composed the famous Yellow River Cantata and the Production Cantata.

In 1940 Xian went to the Soviet Union to compose the score of the documentary film Yan'an and the Eighth Route Army.[2] Before departure Mao Zedong invited him to dinner. In 1941 the German invasion of the Soviet Union disrupted his work and he attempted to return to China by way of Xinjiang but the local anti-communist warlord, Sheng Shicai, blocked the way and he got stranded in Alma Ata, Kazakhstan. It was here that he composed the symphonies Liberation of the Nation and Sacred War, and the suites Red All Over the River and Chinese Rhapsody for winds and strings. He developed pulmonary tuberculosis due to overwork and malnutrition. After the war, Xian went back to Moscow for medical treatment but could not be completely cured and died of pulmonary disease on October 30, 1945[2] in a hospital nearby the Moscow Kremlin at the age of 40.

Xian Xinghai composed over 300 works, published 35 papers, including Nie Erthe Creator of New Chinese Music and On the National Styles of Chinese Music. His influence in Chinese music won him the title People's Composer.

During the Cultural Revolution (1966-1976), when all the Western and some Chinese art was forbidden, the pianist Yin Chengzong arranged the Yellow River Cantata into a concerto for piano and orchestra, by the name of Yellow River Piano Concerto (1969).

After China opened its doors to the world in late 1970s, Yin planned the performance of the piano concerto. There was a debate whether some politically incorrect anthems like "The East Is Red", which Yin interpolated into the concerto, should be removed. It was decided that the work itself was a cultural legacy of the time when it was created, the melodies reminding listeners of that period and creating a unique sense of history. Hence, the work remained intact as it was originally arranged.

Beginning in the 1970s, the Yellow River Concerto has been heard in the West, often performed by Yin Chengzong himself, and in 1988 the Italian pianist Riccardo Caramella became the first Western pianist who performed it in China with a Chinese orchestra, the Beijing Radio Symphony Orchestra.

The epic film The Star and The Sea (2009) created by directors Qiankuan Li and Guiyun Xiao (a husband and wife team) is about the hard childhood and suffering of Xian Xinghai in that period of his life and the efforts of his mother to help him developing his musical talents.

This article uses material from the article Xian Xinghai from the free encyclopedia Wikipedia and it is licensed under the GNU Free Documentation License.

Giuven Grischuner DUS
Update Required To play the media you will need to either update your browser to a recent version or update your Flash plugin.