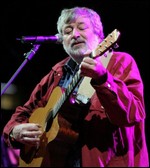 For the album, see Guccini (album).

Francesco Guccini (born June 14, 1940) is an Italian singer-songwriter and author. His songs are renowned for their poetic and literary value; in 1992 he was awarded the Premio Librex Montale in category "Poetry for Music".

Guccini was born in Modena.

As recalled by a verse of one of his songs, "it was fate that in three months" moved his family out of Modena because of World War II. Guccini spent his childhood and part of his youth at his grandparents' place in a small village in the Apennine Mountains called Pàvana in the province of Pistoia, northern Tuscany. The memory of the years of his youth spent in the somewhat archaic society of the mountains of central Italy was to be ever-present in his songs and books.

He then moved back to his family in Modena and attended the local "istituto magistrale". He worked for a couple of years as a reporter for a local newspaper, the Gazzetta di Modena. In 1960 the Guccinis moved to Bologna where Guccini studied at the local university. From 1965 to 1985 he taught Italian at Dickinson College (an American school) in Bologna.

He played in local bands such as The Hurricanes and Gatti and achieved success in the 1960s writing songs for an Italian band, Nomadi, also from Modena. Some of these successes include "Noi non ci saremo" and "Dio è morto". In the 1970s, Nomadi recorded two albums of Guccini's songs as well as a live album, Album Concerto, featuring him. Guccini's own debut album was Folk beat n. 1 (1967).

Guccini has always stated that his first two works, Folk beat n. 1 and Due anni dopo, were essays or experiements, which is noticeable in the quite spare accompaniment to many of the songs on these albums. The latter, however, contained classics like the title-track and "La primavera di Praga". His first mature album is L'Isola non trovata of 1970, which displays many of the themes which were to be present in future releases: for example, a certain melancholy because of the perceived nearness of death. Also characteristic are the portraits of outcasts like "Il frate".

Radici ("Roots", 1972), is one of Guccini's finest works, and contains some of his most famous songs. These include: the title-track, a nostalgic declaration of love for his own youth spent in the Apennine mountains; "La locomotiva", a long ballad about the solitary, unlucky revolt of a Bolognese railwayman during the 19th century; and "Piccola città", about Guccini's early years in provincial Modena.

In 1976 Guccini scored his greatest commercial success with the album Via Paolo Fabbri 43. The title is the street where he still resides in Bologna. The album features the famous "L'avvelenata", a ballad in which Guccini unleashes his rage against music critics. "Piccola storia ignobile" deals with the true story of a woman forced to have an illegal abortion, while "Canzone quasi d'amore" is a parody of love songs masked under Guccini's literary language.[1]

Amerigo (1978), whose title-track is about the story of the emigration of Guccini's uncle to the United States, Metropolis (1981), and Guccini (1983), showed that the Bolognese singer's inspiration was left untouched by the general change to more commercial themes that characterized the Italian musical world from the end of 1970s.

The 1984 live tour was highly successful, and was soon collected in a double live LP, Fra la via Emilia e il West. Emilia Romagna and the Old West symbolize well the double ties of Guccini to his native land and to America. Guccini has said that he encountered the latter early on in life through the comics and magazines imported by US soldiers during World War II, but also through his uncle's stories. After the war, like many Italians of the period, he was of course influenced by American songs and Hollywood movies, and finally travelled to America, even enjoying an affair with an American woman.

His last album in the 1980s was Signora Bovary (1987), containing notable pieces like "Scirocco". After several albums in the 1990s, Guccini returned at his best with Stagioni in 2000: the title-track is a jeremiad against media invasiveness and the moral corruption of Italy.

In the 1970s Guccini made appearances in some bizarre TV shows: in one of them he worked with the then unknown comedian Roberto Benigni.

In recent years, starting with Radiofreccia directed by other Emilian singer and songwriter Luciano Ligabue (1998), Guccini has been featured as an actor in several movies from Italian directors, both comedies and dramas.

The collaborations between the two songwriters extended of course to some songs, one of them present in Guccini's album Stagioni. Guccini also wrote the soundtracks for the movies Nenè by Salvatore Samperi (1977) and Nero by Giancarlo Soldi (1992).

Recently, Guccini has distinguished himself as a writer, publishing some books about his youth in Pàvana and, in collaboration with Loriano Macchiavelli, four mystery books also set in that city and pivoting around the figure of a Carabinieri officer. He has also published a dictionary of the "pavanese" dialect, and told of his youth in the novels Vacca d'un cane and Croniche epafániche.

One of his lesser known activities is as a comics writer. His main productions in this field are the Storie dello spazio profondo ("Deep Space Stories"): it a series of short, humoristic science fiction stories created from 1972 together with his Bolognese friend, the cartoonist Franco Bonvicini.

He received several awards for his artistic work, among them the "Premio Tenco" in 1975 and the "Targhe Tenco" received in 1987 for the song "Scirocco", in 1994 for Parnassius Guccinii and in 2000 for "Ho ancora la forza", written together with Luciano Ligabue.

In 1992 he received the "Librex-Guggenheim" award and in 2003 the municipality of Carpi (in the Modena province) organized an exhibition on his works.

This article uses material from the article Francesco Guccini from the free encyclopedia Wikipedia and it is licensed under the GNU Free Documentation License.