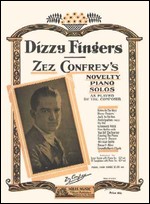 Edward Elzear "Zez" Confrey (April 3, 1895 – November 22, 1971)[1] was an American composer and performer of novelty piano and jazz music. His most noted works were "Kitten on the Keys" and "Dizzy Fingers."

Confrey was born in Peru, Illinois, United States,[1] the youngest child of Thomas and Margaret Confrey. Aspiring to be a concert pianist, he attended Chicago Musical College and studied with private teachers. He later abandoned that idea for composing, encouraged by his oldest brother, James J. Confrey, an organist.[2] By 1916 he was a staff pianist for Witmarks in Chicago.

After World War I, Confrey became a pianist and arranger for the QRS piano roll company.[1] He also recorded for AMPICO's reproducing piano system, which was installed in upper-line pianos such as Mason & Hamlin and Chickering.

In 1921 Confrey wrote his novelty piano solo "Kitten on the Keys", inspired by hearing his grandmother's cat walk on the keyboard of her piano.[2] It became a hit, and he went on to compose many other pieces in the genre.[3] "Dizzy Fingers" (1923) was Confrey's other biggest seller.[3]

Following the 1920s, Confrey focused primarily on composing for jazz bands. He retired after World War II but continued to compose until 1959. He died at age 76 in Lakewood, New Jersey after suffering for many years from Parkinson's disease.[1] He left behind more than a hundred piano works, songs and miniature operas, and numerous piano rolls, music publications and sound recordings.

For piano unless otherwise indicated.

This article uses material from the article Zez Confrey from the free encyclopedia Wikipedia and it is licensed under the GNU Free Documentation License.

Let's Sing This Song Neverage
Update Required To play the media you will need to either update your browser to a recent version or update your Flash plugin.