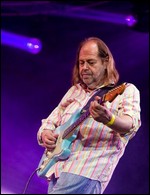 Raymond 'Ray' Russell (born 4 April 1947) is an English session musician who is primarily a guitarist. He is also renowned as a record producer and composer.

In 1973 he was a member of the band Mouse, who released a progressive rock album entitled Lady Killer for the Sovereign record label.

His TV compositions have included A Touch of Frost, Bergerac, Plain Jane, A Bit of a Do, The Inspector Alleyn Mysteries, Dangerfield and Grafters, as well as many other British and American television programmes.

Along with colleagues Mo Foster and Ralph Salmins, Russell gives musical seminars at UK educational establishments [1] and occasionally other venues around the world.

In 2008 Russell, in collaboration with drummer, Ralph Salmins, and sound engineer Rik Walton, created Made Up Music, a music library that has eschewed the usual methodology of distributing audio CDs to sound studios and production companies. It currently achieves its music distribution partially from its website and partially by distributing portable hard drives to music editors. The company features music written and performed by Russell and several other well-established session players, including Mo Foster, Steve Donnelly and Simon Eyre.

This article uses material from the article Ray Russell (musician) from the free encyclopedia Wikipedia and it is licensed under the GNU Free Documentation License.

Empire 77 Bombay Street
Update Required To play the media you will need to either update your browser to a recent version or update your Flash plugin.