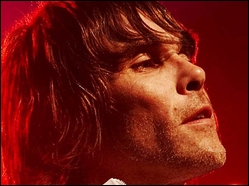 Ian George Brown (born 20 February 1963) is an English musician, best known as the lead singer of the alternative rock band The Stone Roses, which broke up in 1996 but are, since 2012, reunited and touring again. Since the break-up of the Stone Roses he has led a successful solo career. His latest studio album My Way was released on 28 September 2009.

Brown was born in Warrington in 1963.[1] His father, George, was a joiner and his mother Jeane worked as a receptionist in a paper factory.[1] When he was 5, Brown's family, including a brother and sister, moved to Timperley, Altrincham.[2] He was educated at Park Road County Primary Infant and Junior School and then Altrincham Grammar School for Boys.[2] His interest in music was inspired by the punk movement, specifically the bands Sex Pistols, The Clash and Manchester band Slaughter & The Dogs.[3] Brown and original Stone Roses bassist Pete Garner attended the recording of the Clash single "Bankrobber" in Manchester.[4]

Brown's music career began in 1980, playing bass guitar in band with John Squire and Simon Wolstencroft.[5] They eventually became The Patrol, with Andy Couzens on vocals. The band soon split up, with Brown selling his bass to buy a scooter.[6] Brown moved to Hulme, and attended northern soul "all-nighters" across the north of England in the early 1980s as the scene faded. Around this time, Brown met soul legend Geno Washington, who told him, "You should be a star".[7] In 1983 Brown joined The Waterfront, the band that would evolve into The Stone Roses, as co-vocalist.[8]

The Stone Roses rose to prominence in the late 1980s and early 1990s, with their debut album voted the best British album of all time in 2004.[9] The band's second album, Second Coming, received a mixed reaction, and after several changes of line-up, the band split up in October 1996.

On 17 October 2011, Brown alluded to a Stone Roses reunion via text message, saying: "We are going to rule the world again. It's happening."[10] On the following day, a reunion was announced for the band with performances planned for June 2012 in Manchester.[11][12] In a press conference interview, the members of the Stone Roses have said that a new album is planned.[13]

On 2 December 2011 Ian Brown and John Squire performed together live for the first time since 1995. They joined Mick Jones from The Clash, The Farm and Pete Wylie at the Manchester Ritz in a concert in aid of the Justice for Hillsborough campaign. They performed "Elizabeth My Dear" as a duo before being joined by Mick Jones and The Farm for renditions of the Clashs "Bankrobber" and "Armagideon Time" with Ian Brown taking on lead vocals for the three songs.

After a break from music in Morocco, Brown established his solo career with the debut solo single "My Star", which was released in the UK on 12 January 1998.[14] The debut album Unfinished Monkey Business followed on 2 February 1998. The album was produced and financed by Brown, and featured ex-Roses members Mani, Nigel Ipinson, Aziz Ibrahim and Robbie Maddix.[15] The album sold over 300,000 copies.[16]

Brown toured in Summer 1998 with a band that included Ibrahim, Inder Mathura (percussion), Simon Moore (drums), and Sylvan Richardson (bass), including performances at the Glastonbury Festival and the V Festival.[17] Brown was arrested after a flight back from his live show in Paris, and later sentenced to four months in prison for using threatening behaviour towards an airline stewardess and captain, a charge which he denied, causing his tour to be rescheduled.[18][19] His bandmate Aziz Ibrahim condemned the sentence, saying that Brown was "just being cheeky".[20] While in Strangeways Prison, Brown wrote the lyrics for "Free My Way", "So Many Soldiers", and "Set My Baby Free".[21] He was released on parole after two months.

His second album, Golden Greats, was released by Polydor Records 1999. It featured more electronic instrumentation and earned critical acclaim. For his third studio album, Music of the Spheres, Brown sought outside production help for the first time, hiring the services of songwriter and producer Dave McCracken who would go on to become a regular collaborator. He toured the US for the first time as a solo artist in support of the album.[22]

Brown's fourth solo album, Solarized, was released in the UK on 13 September 2004, and was the first to be released under the revived Polydor imprint Fiction Records. When his new Fiction A&R Jim Chancellor was asked in HitQuarters what contribution he makes to Brown's records he said, "There's not as much to do. Ian is very much the master of his own records."[23]

Since the break-up of the Stone Roses in 1996, Brown has released six solo albums and fourteen UK Top 40 singles.[24] He has sold out seven UK tours, and appeared three times at the Glastonbury Festival, including headlining The Other Stage in 2005.[25] He has appeared five times at V Festival since 1998 along with regular appearances at T in the Park and Oxegen festivals, and played the Move festival in 2002 at Lancashire Cricket Ground [26] as well as two tours of Australia in 2006 and 2008.

Brown had a cameo role in the 2004 film Harry Potter and the Prisoner of Azkaban'.[27]

For the 2005/6 season, Brown was the shirt sponsor of London Commercial Division football team Chiswick Homefields, the players wearing an 'IB The Greatest' logo on their chests.[28] Brown is a lifelong supporter of Manchester United and is a season ticket holder.[29]

In September 2007, Brown released his fifth studio album, The World is Yours. The album represented a more political approach in his music, particularly the anti-war track "Illegal Attacks", which featured Sinéad O'Connor. The album also featured former Smith bassist Andy Rourke and Paul Ryder of Happy Mondays.[32] and Steve Jones and Paul Cook of the Sex Pistols

My Way, his sixth solo album, was released in September 2009.[33] It was recorded at London's Battery Studios with producer Dave McCracken; the first single, "Stellify", was released 21 September 2009. Brown played Manchester Arena for the 3rd time in Dec 2009 and in 2010 made his 3rd appearance in Moscow and 2nd in Beijing China Since turning solo in 1998 Brown has played shows in 45 countries

Brown has collaborated several times with UNKLE, appearing on "Be There" in 1999 and on "Reign" on the 2003 album Never, Never, Land, which was also released as a single.[34]

Ian Brown has won numerous awards in his career, in recognition of his work as a solo artist and his work with The Stone Roses. The awards he has won are as follows:

In the UK Ian Brown as a Solo Artist and with The Stone Roses has sold a certified 2.08 million albums.

This article uses material from the article Ian Brown from the free encyclopedia Wikipedia and it is licensed under the GNU Free Documentation License.

Diamonds Sam Smith
Update Required To play the media you will need to either update your browser to a recent version or update your Flash plugin.