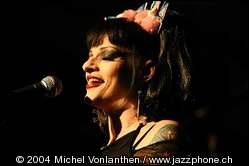 Catharina "Nina" Hagen (born 11 March 1955) is a German singer and actress. She has performed throughout the world for over 40 years.

Nina Hagen was born in the former East Berlin, East Germany, the daughter of Hans Hagen (also known as Hans Oliva-Hagen), a scriptwriter, and Eva-Maria Hagen (née Buchholz), an actress and singer. Her paternal grandfather died in the Sachsenhausen concentration camp (her father was Jewish).[1] Her parents divorced when she was two years old, and growing up she saw her father infrequently. At age four, she began to study ballet, and was considered an opera prodigy by the time she was nine.

Hagen left school at age sixteen, and went to Poland, where she began her career.[2][3] After that, she returned to Germany and joined the cover band Fritzens Dampferband (Fritz's Steamboat Band), together with Achim Mentzel and others. She added songs by Janis Joplin and Tina Turner to the "allowable" set lists during shows.

From 1972 to 1973, Hagen enrolled in the crash-course performance program at The Central Studio for Light Music in East Berlin. Upon graduation, she formed the band Automobil.

In East Germany, she performed with the band Automobil, becoming one of the country's best-known young stars. Her most famous song from the early part of her career was Du hast den Farbfilm vergessen (You forgot the colour film), " a subtle dig mocking the sterile, gray, Communist state,"[4] in 1974. Her musical career in the GDR was cut short, however, when she and her mother left the country in 1976, following the expulsion of her stepfather.

The circumstances surrounding the family's emigration were exceptional: Biermann was granted permission to perform a televised concert in Cologne, but denied permission to re-cross the border to his adopted home country. Hagen submitted an application to leave the country. In it, she claimed to be Biermann's biological daughter, and threatened to become the next Wolf Biermann if not allowed to rejoin her father. Just four days later her request was granted, and she settled in Hamburg, where she was signed to a CBS-affiliated record label. Her label advised her to acclimate herself to Western culture through travel, and she arrived in London during the height of the punk rock movement. Hagen was quickly taken up by a circle that included The Slits and Sex Pistols.

Back in Germany by mid-1977, Hagen formed the Nina Hagen Band in West Berlin's Kreuzberg district. In 1978 they released their self-titled debut album, which included the single "TV-Glotzer" (a cover of "White Punks on Dope" by The Tubes, though with entirely different German lyrics), and Auf'm Bahnhof Zoo, about West Berlin's then-notorious Berlin Zoologischer Garten station. The album also included a version of "Rangehn" ("Go For It"), a song she had previously recorded in East Germany, but with different music.

The album gained significant attention throughout Germany and abroad, both for its hard rock sound and for Hagen's theatrical vocals, far different from the straightforward singing of her East German recordings. However, relations between Hagen and the other band members deteriorated over the course of the subsequent European tour, and Hagen decided to leave the band in 1979, though she was still under contract to produce a second album. This LP, Unbehagen (which in German also means discomfort or unease), was eventually produced with the band recording their tracks in Berlin and Hagen recording the vocals in Los Angeles, California. It included the single "African Reggae" and a cover of Lene Lovich's "Lucky Number". The other band members sans Hagen, soon developed a successful independent musical career as Spliff.

A European tour with a new band in 1980 was cancelled, and Hagen turned to the United States. A limited-edition 10-inch EP was released on vinyl that summer in the U.S. Two songs from her first album Nina Hagen Band were on the A side, and two songs from her second album Unbehagen were on the B-side. All four songs were sung in German, although two had English titles and the other two were covers of English-language songs with new German lyrics.

In late 1980, Hagen discovered she was pregnant, broke up with the father-to-be Ferdinand Karmelk,[7] and moved to Los Angeles. Her daughter, Cosma Shiva Hagen, was born in Santa Monica on 17 May 1981. In 1982, Hagen released her first English-language album: NunSexMonkRock, a dissonant mix of punk, funk, reggae, and opera. She then went on a world tour with the No Problem Orchestra.

In 1983, she released the album Angstlos and a minor European tour. By this time, Hagen's public appearances were becoming stranger and frequently included discussions of God, UFOs, her social and political beliefs, animal rights and vivisection, and claims of alien sightings. The English version of Angstlos, Fearless, generated two major club hits in America, "Zarah" (a cover of the Zarah Leander (No. 45 USA) song "Ich weiss, es wird einmal ein Wunder geschehen") and the disco/punk/opera song, "New York New York" (No. 9 USA). During 1984 Hagen spent a lot of time in London and UK based MusicSzene magazine chief-editor Wilfried Rimensberger, in conjunction with Spree Film, produced a first TV feature on her and what was remaining from London's 70 Punk movement induced by artist and model Frankie Stein.

Her 1985 album In Ekstase fared less well, but did generate club hits with "Universal Radio" (No. 39 USA) and a cover of "Spirit In The Sky" and also featured a 1979 recording of her hardcore punk take on Paul Anka's My Way, which had been one of her signature live tunes in previous years. She performed songs from this album during the 1985 version of Rock in Rio. Wilfried Rimensberger and award-winning film director Lothar Spree produced a TV documentary for German Television ZDF. This was followed by a launch of Nina's UFO fashion underwear at anti-SAFT in Zurich, where again Rimensberger joined her up with New Romantic icon Steve Strange performing on stage. Simultaneously fashion photographer Hannes Schmid produced a Nina Hagen cover for German Cosmopolitan magazine. This also coincided with leading music publications like BRAVO and MusicSzene running cover stories that all put Hagen back on the forefront of something that in retrospective became a final highpoint of what the punk movement was all about. At the end of 1986, her contract with CBS was over and she released the Punk Wedding EP independently in 1987, a celebration of her marriage to a 17-year-old-punk nicknamed 'Iroquois'. It followed an independent 1986 one-off single with Lene Lovich, the anthemic Don't Kill The Animals. In 1989, Hagen released the album Nina Hagen which was backed up by another German tour.

In the 1990s, Hagen lived in Paris with her daughter Cosma Shiva and son Otis. In 1991 she toured Europe in support of her new album Street. In 1992 Hagen became the host of a TV show on RTLplus. Also in the same year (1992) she collaborated with Adamski on the European smash and minor UK hit single "Get Your Body". The following year, she released Revolution Ballroom. In 1994, Hagen starred in the acclaimed San Francisco Goethe Institut's "The Seven Addictions and Five Professions of Anita Berber", playing the singer version of "Anita" alongside dancer Jennifer Pieren who portrayed the other "professions" of "Anita". Also, her voice was heard on the Freaky Fukin Weirdoz single "Hit Me With Your Rhythm Stick". 1995 brought the German-language album Freud Euch appeared, recorded in English as BeeHappy in 1996. Nina returned to San Francisco to star in another San Francisco Goethe Institut show, "Hannusen, Hitler's Jewish Clarvoyant." Hagen also collaborated with electronic music composer Christopher Franke, along with Rick Palombi (credited as Rick Jude) on "Alchemy of Love", the theme song for the film Tenchi Muyo! in Love. In May 1996, she married David Lynn, who is fifteen years younger, but divorced him in the beginning of 2000. In 1997 she collaborated with German hip hop musician Thomas D.

In 1998, Hagen became the host of a weekly science fiction show on the British Sci-Fi Channel, in addition to embarking on another tour of Germany. In 1999, she released the devotional album Om Namah Shivay, which was distributed exclusively online and included an unadulterated musical version of the Hare Krishna mantra (in real life she believes that the Hindu incarnation of God known as Krishna was 'the king of Jerusalem'. Krishna is sometimes referred to as "Christ"). She also provided vocals to "Witness" and "Bereit" on KMFDM's Adios.

Also in 1998, she recorded the official club anthem (Eisern Union !) for FC Union Berlin and four versions were issued on a CD single by G.I.B Music and Distribution GmbH.

In 1999, she played the role of Celia Peachum in The Threepenny Opera by Kurt Weill and Bertolt Brecht, alongside Max Raabe. She also regularly performs songs by Kurt Weill, Hans Eisler and Paul Dessau set to Brecht's texts.

In 2000, her song Schön ist die Welt became the official song of Expo 2000. Another cover of a Zarah Leander song "Der Wind hat mir ein Lied erzählt" was a minor hit the same year. The album The Return of the Mother was released in February 2001, accompanied by another German tour. In 2001 she collaborated with Rosenstolz and Marc Almond on the single Total eclipse/Die schwarze Witwe that reached No. 22 in Germany. On 14 October 2002 Nina hit Moscow by coming there with her concert, while interviews with the eccentric singer were aired on many TV-channels.

Hagen dubbed the voice of Sally in the German release of Tim Burton's The Nightmare Before Christmas, and she has also done voice work on the movie Hot Dogs by Michael Schoemann. Hagen has been featured on songs by other bands, for instance on Oomph!'s song "Fieber". She did a cover of Rammstein's "Seemann" with Apocalyptica. Later albums include Big Band Explosion, in which she sang numerous swing covers with her then husband, Danish singer and performer, Lucas Alexander. This was followed by Heiß, a greatest hits album. The following album, Journey to The Snow Queen, is more of an audio bookshe reads the Snow Queen fairy tale with Tchaikovsky's The Nutcracker in the background. In 2005 Nina Hagen headlined the Drop Dead Festival in New York City. Hagen has been an active protester against the war in Iraq. In 2006 she was a part of the Popstars team. She is a vegetarian.[9] In August 2009 she was baptized in the Protestant Reformed church of Schüttorf.[10] On October 21 after seven years passed she visited Moscow[11] again. After a four year lapse her next album, Personal Jesus, was released July 16, 2010, followed by Volksbeat, released November 11, 2011.

This article uses material from the article Nina Hagen from the free encyclopedia Wikipedia and it is licensed under the GNU Free Documentation License.

Going On Zoder
Update Required To play the media you will need to either update your browser to a recent version or update your Flash plugin.