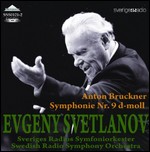 In 2000 Svetlanov was fired from his post with the Russian State Symphony Orchestra by the minister of culture of Russia, Mikhail Shvydkoi. The reason given was that Svetlanov was spending too much time conducting abroad and not enough time in Moscow.

Svetlanov was particularly noted for his interpretations of Russian works – he covered the whole range of Russian music, from Mikhail Glinka to the present day. He was also one of the few Russian conductors to conduct the entire symphonic output of Gustav Mahler.

Warner Music France has issued an "Édition officielle Evgeny Svetlanov" featuring Svetlanov's legacy of recordings as conductor and pianist, which by July 2008 had run to 35 volumes of CDs, often multiple-CD boxed sets. The biggest of these is the 16-CD box of the complete symphonies of Nikolai Myaskovsky, to whose music Svetlanov was devoted.

The first Airbus A330 for Aeroflot, as well as asteroid 4135 Svetlanov, were named after Svetlanov.[5][6] The State Academic Symphony Orchestra of the Russian Federation and an international conducting competition also carry his name.[7]

This article uses material from the article Yevgeny Svetlanov from the free encyclopedia Wikipedia and it is licensed under the GNU Free Documentation License.

Señorita Shawn Mendes & Camila Cabello
Update Required To play the media you will need to either update your browser to a recent version or update your Flash plugin.