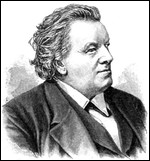 August Wilhelm Julius Rietz (28 December 1812, Berlin – 12 September 1877,[1] Dresden) was a German composer, conductor and cellist. He was a teacher among whose students were Woldemar Bargiel,[2] Salomon Jadassohn and Arthur Sullivan.[3] He also edited many works by Felix Mendelssohn for publication.

He studied the cello under Schmidt, Bernhard Romberg, and Gans. At 16, he joined the orchestra of the Königstädter Theater, for which he wrote the music to Holtei's play Lorbeerbaum und Bettelstab. In 1834, he was appointed assistant conductor at the Düsseldorf Opera under Mendelssohn, whom he succeeded the following year. In 1847, he was called to Leipzig as theatre kapellmeister and conductor of the Singakademie. In 1848, he succeeded Mendelssohn as conductor of the Gewandhaus concerts and as teacher of composition at the Conservatory. He was called to Dresden in 1860 to succeed Reissiger as court kapellmeister. Here he conducted the opera and afterwards undertook the direction of the royal conservatory. He died at Dresden.[4]

As a composer, he belongs to the younger classic school and was strongly opposed to the Neo-German movement. Among his works are the operas, three symphonies, several overtures to plays, flute sonatas, violin sonatas, motets, masses, psalms, and a quantity of other church music.[4]

The Louisville Orchestra First Edition series contained, besides many works mostly by modern composers (usually American), Rietz' Concert Overture, opus 7 (coupled with the second symphony of Max Bruch), and recorded around 1970.[5] This may have been the same concert overture commissioned by the Lower Rhenish Music Festival to commemorate an anniversary .[6]

This article incorporates information from the German Wikipedia.

This article uses material from the article Julius Rietz from the free encyclopedia Wikipedia and it is licensed under the GNU Free Documentation License.

Black Velvet Alannah Myles
Update Required To play the media you will need to either update your browser to a recent version or update your Flash plugin.