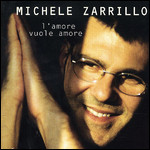 Michele Zarrillo (born 13 June 1957) is an Italian singer-songwriter. He is mainly known for hits such as "Una rosa blu", "Cinque giorni" and "La notte dei pensieri". In 1987 he won the Sanremo Music Festival, competing in the newcomers' section. Zarrillo took part in the competition several other times, the last time in 2008 with the song "L'ultimo film insieme". As a songwriter, he penned songs for several artists, including Ornella Vanoni and Renato Zero.

Zarrillo debuted as a musician in the 1970s, when he started playing guitar in the band Semiramis.[1] In 1973, the band released the album Dedicato a Frazz.[2] Meanwhile, he wrote songs for popular Italian artists, including Ornella Vanoni and Renato Zero.[3]

In 1982 Zarrillo competed as a soloist at the Sanremo Music Festival performing the song "Su quel pianeta libero".[4] The following year he competed for the second time singing "Una rosa blu", but was eliminated on the first night of the show.[4] The song was re-released in 1997 and become a hit in Italy.[5] "Una rosa blu" was also included in Zarrillo's debut album, Sarabanda, released in 1982.[6]

In 1987, Zarrillo competed for the third time at the Sanremo Music Festival, finishing first in the newcomers' section with the song, "La notte dei pensieri".[7] His second studio album, Soltanto amici, was released in 1988.[8] Adesso followed in 1992. Most of the songs included in the album were co-written by Vincenzo Incenzo, who collaborated with Zarrillo on most of his following albums.[3] Once again, the album was launched after competing in the Sanremo Music Festival of the same year, with the song "Strade di Roma".

In 1994, Zarrillo released the single "Cinque giorni", which placed fifth in the 44th Sanremo Music Festival[9] and became one of his best-known songs,[10] receiving strong airplay in the weeks following its release.[1] The song was also included in Zarrillo's third studio album, Come uomo tra gli uomoni.[1] Two years later, Zarrillo released the album "L'elefante e la farfalla", including the song with the same title, performed during the Sanremo Music Festival, 1996.[11]

In 1997, Zarrillo released his first compilation album, L'amore vuole amore, which was a commercial success, being certified platinum five times by the Federation of the Italian Music Industry for domestic sales exceeding 500,000 units.[1][12] A Spanish-language version of the album was also released in Spain, where "Cinco Dias" was released as a single.[13]

In 2003, Zarrillo released the album Liberosentire, followed by L'alfabeto degli amanti in 2006, preceded by the single with the same title, which competed once again in the Sanremo Music Festival.[1] Zarrillo's eleventh participation in the Sanremo Music Festival was in 2008, when he performed the song "L'ultimo film insieme", featured on the compilation album Nel tempo e nell'amore.[1]

On 20 September 2011, Zarrillo released the album Unici al mondo, preceded by the single "La prima cosa che farò" and promoted through a concert tour in Italy.[17]

This article uses material from the article Michele Zarrillo from the free encyclopedia Wikipedia and it is licensed under the GNU Free Documentation License.

Cloud Number Nine (Chicane Mix) Bryan Adams
Update Required To play the media you will need to either update your browser to a recent version or update your Flash plugin.