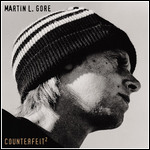 Martin Lee Gore (born 23 July 1961)[1] is an English songwriter, singer, guitarist and keyboardist, and also producer, remixer and DJ. He is a founding member of Depeche Mode and has written the majority of their songs. His work now spans over three decades. Gore's best-known compositions include hits such as "Personal Jesus", "Enjoy the Silence", "I Feel You", "People Are People", "Everything Counts", "Shake the Disease" and "Never Let Me Down Again".

In addition to composing music and writing lyrics for Depeche Mode songs, he has also been lead vocalist on several, and usually solo (some examples are, "Somebody", "A Question of Lust" and "Home"), as evidenced by most of the Depeche Mode concerts, and has been a backing vocalist on many others.

In 1999, Gore received the Ivor Novello Award from the British Academy of Songwriters, Composers and Authors for "International Achievement".

Gore was born in Dagenham, Essex in England. He left Nicholas School, Basildon in 1977 and took a job as a bank cashier. During evenings, weekends and any other spare time, he was involved with the local band Norman and the Worms with school friend Phil Burdett who later went on to become a singer/songwriter himself.

In 1980, Gore met Andy "Fletch" Fletcher at the Van Gogh club. Fletcher recruited Gore into his band Composition of Sound along with Vince Clarke. Soon the band drafted Dave Gahan to be the lead singer after hearing him sing "Heroes" by David Bowie. Gahan is credited with the name "Depeche Mode" after seeing the phrase as a title of a French fashion magazine, which later considered taking them to court, but thought it would be good publicity for the magazine to let the band have the name.

Clarke left Depeche Mode in late 1981, shortly after the release of their debut album Speak & Spell. Clarke wrote most of the album, with Gore contributing two tracks, "Tora! Tora! Tora!" and the instrumental "Big Muff". "Any Second Now (voices)" features Gore's first lead vocals for the band. Gore sings lead vocals on several of the band's songs, notably ballads, his tenor voice providing a contrast to Gahan's dramatic baritone. When Clarke announced his departure from Depeche Mode in 1981, citing the pressures of fame and creative differences, Gore took over songwriting. Gore had been writing material since the age of twelve.

Gore sometimes plays guitars, typically his Gretsch White Falcon or Gretsch Double Anniversary on Depeche Mode songs. The first time guitar was used as the main instrument was on "Personal Jesus", although he used small guitar parts on previous songs, such as "Behind the Wheel" and "Love, in Itself". Gore's guitar playing developed even more on Songs of Faith and Devotion. However, in live performances, he switches his keyboards for his guitar on some older Depeche Mode songs, such as "Never Let Me Down Again" and "A Question of Time". In mid 1990 Gore stated

On 27 May 1999, Gore was presented with an award by Daniel Miller for "International Achievement", by the British Academy of Songwriters, Composers and Authors, at the 44th Ivor Novello Awards, at The Grosvenor House Hotel.[3][4]

Gore's biological father was a black G.I. stationed in Britain.[5] Gore was raised by his stepfather and biological mother and, as an adult, met his father in the American South. Gore responds to the source's information and is quoted in Miller's book saying, "It brings up family traumas" and "It's one of those things I'd rather not talk about".

Depeche Mode's lead vocals are generally handled by Dave Gahan, but on occasion Gore will sing lead. These are all the songs he sings, in chronological order:

These are songs where Gahan and Gore have around equal singing time, in chronological order. In some instances, both sing at the same time (ex: "Behind the Wheel"), and in others, Gahan sang the verses while Gore sang the chorus (ex: "Everything Counts").

These are songs that Gore has sung lead live, although the studio versions are sung by Gahan, in chronological order of the song's first live performance by Gore. It includes his solo concerts in 2003. To date, the only Gore-led song that was sung by Gahan live was "Route 66" which was the closer during the World Violation Tour.

This article uses material from the article Martin Gore from the free encyclopedia Wikipedia and it is licensed under the GNU Free Documentation License.