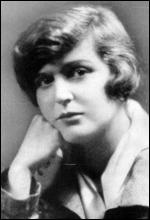 Germaine Tailleferre (French pronunciation: [tjf]; 19 April 18927 November 1983) was a French composer and the only female member of the group of composers known as Les Six.

She was born Marcelle Taillefesse at Saint-Maur-des-Fossés, Val-de-Marne, France, but as a young woman she changed her last name to "Tailleferre" to spite her father, who had refused to support her musical studies. She studied piano with her mother at home, composing short works of her own, after which she began studying at the Paris Conservatory where she met Louis Durey, Francis Poulenc, Darius Milhaud, Georges Auric and Arthur Honegger. At the Paris Conservatory her skills were rewarded with prizes in several categories. Most notably Tailleferre wrote 18 short works in the Petit livre de harpe de Madame Tardieu for Caroline Tardieu, the Conservatorys Assistant Professor of Harp.

With her new friends, she soon was associating with the artistic crowd in the Paris districts of Montmartre and Montparnasse including the sculptor Emmanuel Centore who later married her sister Jeanne. It was in the Montparnasse atelier of one of her painter friends where the initial idea for Les Six began. The publication of Jean Cocteau's manifesto Le coq et l'Arlequin resulted in Henri Collet's media articles that led to instant fame for the group, of which Tailleferre was the only female member.

In 1923, Tailleferre began to spend a great deal of time with Maurice Ravel at his home in Monfort-L'Amaury. Ravel encouraged her to enter the Prix de Rome Competition. In 1925, she married Ralph Barton, an American caricaturist, and moved to Manhattan, New York. She remained in the United States until 1927 when she and her husband returned to France. They divorced shortly thereafter.

Tailleferre wrote many of her most important works during the 1920s, including her 1st Piano Concerto, the Harp Concertino, the ballets Le marchand d'oiseaux (the most frequently performed ballet in the repertoire of the Ballets suédois during the 1920s) and La nouvelle Cythère which was commissioned by Sergei Diaghilev for the ill-fated 1929 season of the famous Ballets Russes, and Sous les ramparts d'Athènes in collaboration with Paul Claudel, as well as several pioneering film scores, including B'anda, in which she used African themes.

The 1930s was even more fruitful, with the Concerto for Two Pianos, Choeurs, Saxophones and Orchestra, the Violin Concerto, the operas Zoulaïna and Le marin de Bolivar, and her masterwork, La cantate de Narcisse in collaboration with Paul Valéry. Her work in film music included Le petit chose by Maurice Cloche, and a series of documentaries.

At the outbreak of World War II, she was forced to leave the majority of her scores at her home in Grasse, with the exception of her recently completed Three Études for Piano and Orchestra. Escaping across Spain to Portugal, she found passage on a boat that brought her to the United States, where she lived the war years in Philadelphia, Pennsylvania.

After the war, in 1946, she returned to her home in France, where she composed orchestral and chamber music, plus numerous other works including the ballets Paris-Magie (with Lise Delarme) and Parisiana (for the Royal Ballet of Copenhaugen), the operas Il était un petit navire (with Henri Jeanson), Dolores, La petite sirène (with Philip Soupault, based on Hans Christian Andersen's story "The Little Mermaid") and Le maître (to a libretto by Ionesco), the musical comedy Parfums, the Concerto des vaines paroles, for baritone voice, piano and orchestra, the Concerto for Soprano and Orchestra, the Concertino for Flute, Piano and Orchestra, the Second Piano Concerto, the Concerto for Two Guitars and Orchestra, her Second Sonata for Violin and Piano, the Sonata for Harp, as well as an impressive number of film and television scores. The majority of this music was not published until after her death.

In 1976, she accepted the post of accompanist for a children's music and movement class at the École alsacienne, a private school in Paris. During the last period of her life, she concentrated mainly on smaller forms, due to increasing problems with arthritis in her hands. She nevertheless produced the Sonate champêtre for oboe, clarinet, bassoon, and piano, The Sonata for Two Pianos, Choral and Variations for Two Pianos or Orchestra, a series of children's songs (on texts by Jean Tardieu) and pieces for young pianists. Her last major work was the Concerto de la fidelité for coloratura soprano and orchestra, which was premièred at the Paris Opera the year before her death.

Germaine Tailleferre continued to compose right up until a few weeks before her death, on 7 November 1983 in Paris. She is buried in Quincy-Voisins, Seine-et-Marne, France.

This article uses material from the article Germaine Tailleferre from the free encyclopedia Wikipedia and it is licensed under the GNU Free Documentation License.

Glass Train Redwood
Update Required To play the media you will need to either update your browser to a recent version or update your Flash plugin.