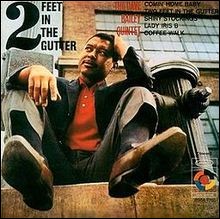 Born in Portsmouth, Virginia, Bailey studied drumming in New York City at the Music Center Conservatory following his stint in the Air Force in World War II. He played with Herbie Jones from 195153, and later with Johnny Hodges, Charles Mingus, Lou Donaldson, Curtis Fuller, Billy Taylor, Art Farmer, Ben Webster, and Horace Silver. Between 1954 and 1968 he played on several sessions led by Gerry Mulligan, and in the 1960s he also played with Clark Terry, Kenny Dorham, Grant Green, Lee Konitz, Cal Tjader, Roger Kellaway, and Bob Brookmeyer. In 1969 he retired from music and became a flight instructor. From 1973 he worked in music education in New York; among other things, he was involved with The Jazzmobile.

This article uses material from the article Dave Bailey (musician) from the free encyclopedia Wikipedia and it is licensed under the GNU Free Documentation License.

Rush Rush Paula Abdul
Update Required To play the media you will need to either update your browser to a recent version or update your Flash plugin.