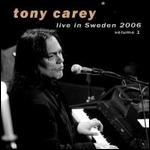 Anthony Lawrence Carey (born October 16, 1953, Watsonville, California) is an American-born, European-based musician, composer, producer, and singer/songwriter. One of his earliest musical experiences was in a band called Blessings, in which he played until 1975 when Ritchie Blackmore hired him as keyboardist for Rainbow. He played with Rainbow on two world tours, until 1977. After his departure from Rainbow, he began a solo career, releasing albums under his own name as well under the pseudonym Planet P Project, and producing for and performing with other artists.[1]

With the band Rainbow, Carey appeared on the studio album Rainbow Rising (1976, #48 on The Billboard 200) and on the live albums On Stage (1977, #65 on The Billboard 200) and Live in Germany (1994). Carey performed the keyboard introduction to "Tarot Woman", the first track on the Rainbow Rising album and the keyboard solo on "A Light in the Black", the last cut on the album.

He had minor hits in 1982 from the LP I Wont Be Home Tonight (#167 on The Billboard 200) with the title track "I Won't Be Home Tonight" (#79 Billboard Hot 100, #8 US Mainstream Rock Charts) and "West Coast Summer Nights" (#64 Billboard Hot 100) Then, after sidestepping to another project for 1983, Carey would return to his solo career a year later, releasing Some Tough City, with the single "A Fine, Fine Day" reaching #22 on the Billboard Hot 100 singles chart[2] and also #1 on the Top Rock Tracks chart. A follow-up single, "The First Day of Summer" reached #33 on the Hot 100 in July 1984 and appeared in the 1985 film Secret Admirer. The album itself, Some Tough City, took the #60 spot on the Billboard 200 album chart. Carey opened for Night Ranger on many dates of their 1984 tour in support of this album. His 1985 follow-up album, Blue Highway, did not score a hit on radio.

Carey also fronted the space/progressive rock group Planet P Project (initially called just Planet P), which served as a vehicle for his solo work. Planet P Project released two albums in the 1980s, Planet P (#42 on The Billboard 200, on Geffen Records) in 1983 and the concept album, Pink World (#121 on The Billboard 200, on MCA Records) in 1984, for which he wrote the lyrics and music, sang the lead vocals, and played most of the instruments. Session performers on lead guitar, saxophones, programming, and drums on some tracks made up the rest of the group. The first album was released on CD in 1992, retitled Planet P Project. Planet P's hits included "Why Me" (#64 on The Billboard Hot 100, #4 on Mainstream Rock Charts), "Static" (#24 on Mainstream Rock Charts) and "What I See" (#25 on Mainstream Rock Charts). Planet P Project returned 2003-2009 with a trilogy of albums collectively called Go Out Dancing (G.O.D.). The albums were 1931 (2003), Levittown (2008), and Out In The Rain (2009). In 2013 a boxset of these three cd's is planned, 'the G.O.D.B.O.X.', with bonus material, remixes/remasters, and extensive liner notes.

Carey began producing and guesting on many major groups from the US and Europe in the mid 80s. Notables of the many included Jennifer Rush in 1985, John Mayall & The Bluesbreakers Chicago Line in 1988, keyboards and producer. In 1992 with Joe Cocker Now That You're Gone, Forest McDonald's Color Blind, Chris Norman, Peter Maffay, Milva, and in 2006 from Dire Straits, David Knopfler Songs For The Siren. In a November 12, 2011 interview on Lkcb 128.4 Internet Radio [1] Carey said 'Ive written over a thousand songs, for myself. other artists, and film and TV productions.'. (Leonard k Collins Verify)

After his 1987 release Bedtime Story (soundtrack for the German film The Joker with Peter Maffay) he recorded a second soundtrack album, called Wilder Western Inclusive, which featured the hit single "Room With A View" (#3 on the German Charts, 1989), which stayed 18 weeks on the charts and received gold.A third OST followed in 1995, 'Gefangen in Jemen', accompanying Maffay's second film. In 1989 he released his album For You, which featured the singles "I Feel Good" (#35 on the German Charts) and "No Man's Land" (feat. Eric Burdon and Anne Haigis). Then he released his albums Storyville (1990), The Long Road (1992) and Cold War Kids (1994). Other releases in the early 00's included 'Island and Deserts' and several live recordings. 'Christmas Hymns' and two cd's of cover songs, 'Stanislaus County Kid I & II' followed in 2009/10, after a (winning) battle with cancer. 'I tried to get my "bucket list" finished as quickly as i could; it wasn't a certainty that I'd be around much longer', notes Carey. 'I've lost a few organs; fortunately, the Hammond wasn't among them'.

In 2009, Tony Carey and three other ex-members of Rainbow, Joe Lynn Turner, Bobby Rondinelli and Greg Smith teamed up with Jürgen Blackmore, Ritchie Blackmore's son, to form "Over the Rainbow" to perform Rainbow songs in concerts in Russia and Eastern Europe. Due to illness, however, Tony Carey left Over the Rainbow in the spring of 2009, just prior to the band's live debut at the Sweden Rock Festival, where he was replaced by Paul Morris.

In 2010 it was announced that Tony Carey had formed a new musical racing project called EBC ROXX with (J.R.) Jürgen Blackmore & Ela. Their first single "Silver Arrows" was released in March 2010 and was written as the anthem to accompany the first race of Mercedes Formula 1 pilots Michael Schumacher and Nico Rosberg this season. The project later announced that a full CD entitled "Winners" would be released on September 20, 2010.

After officially dismantling "Planet P Project" in 2009 with the 3rd & final part to the "G. O. D."-trilogy - "Out In The Rain", Carey again revived the project with the release of "Steeltown" in 2013, this time merging his solo career name with the project's name ( "Tony Carey's Planet P Project"). "Steeltown" is based on Norway & its history, after Carey played and travelled there extensively, both as a solo artist, and with a band consisting of mostly Norwegian musicians. Influenced by the occupation years of World War II & the way Norway as a nation handled this, the work is also a statement about the eternal religious conflicts world wide. There are plans to tour with "Tony Carey's Planet P Project" in the near future.[3]

Carey is currently writing 'Lucky Us', a return to simpler people-based themes. 'I wrote 6 political history lessons; I think I've said all i have to say about that for awhile... '. 'Lucky Us' is expected to be released in the summer or fall of 2014.

Carey lives and works in Hamburg and Wiesbaden, Germany. August 11, 2013 marked his 35th anniversary as a European resident.

This article uses material from the article Tony Carey from the free encyclopedia Wikipedia and it is licensed under the GNU Free Documentation License.

Adriana Chris Maldah
Update Required To play the media you will need to either update your browser to a recent version or update your Flash plugin.