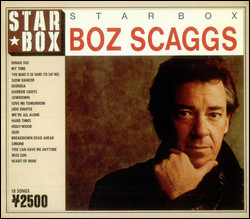 William Royce "Boz" Scaggs (born June 8, 1944) is an American singer, songwriter, and guitarist.[1] He is most well-known for his worldwide chart topping albums of the late 1970's and hit singles including "Lido Shuffle" and the Grammy award winning "Lowdown" from the critically acclaimed album Silk Degrees (1976), which peaked at #2 on the Billboard 200. Scaggs continues to write, record music, and tour.[2]

Scaggs was born in Canton, Ohio,[1] the eldest child of a traveling salesman. Their family moved to McAlester, Oklahoma, then to Plano, Texas (at that time a farm town), just north of Dallas. He attended a Dallas private school, St. Mark's School of Texas, where schoolmate Mal Buckner gave him the nickname "Bosley", later shortened to "Boz".[3]

After learning guitar at the age of 12, he met Steve Miller at St. Mark's School. In 1959, he became the vocalist for Miller's band, the Marksmen. The pair later attended the University of Wisconsin–Madison together, playing in blues bands like the Ardells and the Fabulous Knight Trains.[1]

Leaving school, Scaggs briefly joined the burgeoning rhythm and blues scene in London, then traveled on to Sweden as a solo performer, and in 1965 recorded his solo debut album, Boz, which failed commercially.[1] Scaggs also had a brief stint with the band the Other Side with Mac MacLeod and Jack Downing.

Returning to the U.S., Scaggs promptly headed for the booming psychedelic music center of San Francisco in 1967. Linking up with Steve Miller again, he appeared on the Steve Miller Band's first two albums, Children of the Future and Sailor in 1968. Scaggs secured a solo contract with Atlantic Records in 1968, releasing his second album, Boz Scaggs, featuring the Muscle Shoals Rhythm Section and session guitarist Duane Allman, in 1969. Despite good reviews, this release achieved only moderate sales. He then briefly hooked up with Bay Area band Mother Earth in a supporting role on their second album Make a Joyful Noise on guitar and backup vocals. Scaggs then signed with Columbia Records; his first four albums for Columbia all charted, with his best peaking at #81.[1]

In 1976, using session musicians who later formed Toto, he recorded Silk Degrees.[1] The album reached #2 on the US Billboard 200, and #1 in a number of other countries, spawning four hit singles: "It's Over", "Lowdown", "What Can I Say", and "Lido Shuffle",[1] as well as the poignant ballad "We're All Alone", later recorded by Rita Coolidge and Frankie Valli. "Lowdown" sold over one million copies in the US[4] and won the Grammy Award for Best R&B Song, which was shared by Scaggs and David Paich.

A sellout world tour followed, but his follow-up album in 1977 Down Two Then Left did not sell as well as Silk Degrees and neither of its singles reached the Top 40.[1] The 1980 album Middle Man spawned two top 20 hits, "Breakdown Dead Ahead" and "Jojo"; and Scaggs enjoyed two more hits in 1980-81: "Look What You've Done to Me", from Urban Cowboy soundtrack, and "Miss Sun", from a greatest hits set. Both were US #14 hits.

From 1989 to 1992, Scaggs joined Donald Fagen, Phoebe Snow, Michael McDonald and others in The New York Rock and Soul Revue. His next solo release was the album Some Change in 1994. He issued Come On Home, an album of rhythm and blues, and My Time: A Boz Scaggs Anthology, an anthology, in 1997.

He garnered good reviews with Dig although the CD was released on September 11, 2001. In May 2003, Scaggs released But Beautiful, a collection of jazz standards that debuted at number one on the jazz chart. In 2008 he released Speak Low, which he described in the liner notes as "a sort of progressive, experimental effort ... along the lines of some of the ideas that Gil Evans explored." During 2004, he released a DVD and a live 16-track CD Greatest Hits Live that was recorded August 2003 at the Great American Music Hall in San Francisco.

After a break in recording, he undertook a series of shows across the US in 2008. Two years later he joined Donald Fagen and Michael McDonald for concerts entitled the Dukes of September Rhythm Revue. Scaggs's next album Memphis was released in March 2013. It was recorded in that Southern American city at the Royal Studios. The album included some of his favorite compositions from other artists. A tour of the United States, Canada and Japan followed the release. Before the year ended, he added live dates across North America and Australia for 2014. In 2015, he released A Fool to Care, a compilation of mostly covers, including "Whispering Pines" with Lucinda Williams, and one original blues composition, "Hell to Pay," performed with Bonnie Raitt. The album rose to number one on the Billboard Blues Album chart and number 54 on the Billboard 200.[6]

Scaggs' first marriage was to Carmella Storniola. They had two sons: Austin, a music journalist with a column called "The Smoking Section" in Rolling Stone, and Oscar, who at age 21 died of a heroin overdose in 1998.[7][8] Scaggs and Carmella divorced in 1980,[9] and after a child custody battle, they were awarded joint custody of their sons.[10] Carmella died in February 2017.[11]

Scaggs and his current wife Dominique (whom he married in 1992)[12] grow grapes in Napa County, California, and have produced their own wine.[13]

With the Steve Miller Band

This article uses material from the article Boz Scaggs from the free encyclopedia Wikipedia and it is licensed under the GNU Free Documentation License.