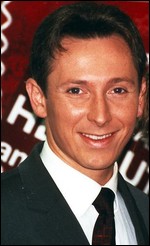 Helmut Lotti (born Helmut Barthold Johannes Alma Lotigiers on 22 October 1969), is a Belgian tenor[1] and singer-songwriter. Lotti performs in several styles and languages. Once an Elvis impersonator, he has sung African and Latino and Jewish music hit records, and he crossed over into classical music in the 1990s.[1]

The son of Luc and Rita (née Lagrou), Helmut Barthold Johannes Alma Lotigiers was born in Ghent, Belgium, and began his singing career with a visual and singing style in an obvious imitation of Elvis Presley, and was described as "De Nieuwe Elvis" (in Dutch) or "The New Elvis". His first two albums were Vlaamse Nachten ("Flemish Nights", 1990) and Alles Wat Ik Voel ("All That I Feel", 1992). After a few more albums, he changed direction in 1995 with the first of what became a long series of "Helmut Lotti Goes Classic" albums, which proved to increase his popularity. Since 2000 he has also made successful recordings in traditional Latino, African and Russian-style music.

Lotti sings in his native language Dutch, as well as Afrikaans, English, French, German, Hebrew, Italian, Latin, Russian, Spanish, Ukrainian, Zulu, Xhosa, Ndebele and others. He has sold over 13 million albums worldwide and received over 90 platinum and 70 gold albums.

Lotti does volunteer work as an ambassador for UNICEF. Lotti took part in the 0110 concerts against racism, organised by Tom Barman.

This article uses material from the article Helmut Lotti from the free encyclopedia Wikipedia and it is licensed under the GNU Free Documentation License.

Let Me Dream This Dream Danny Concannon
Update Required To play the media you will need to either update your browser to a recent version or update your Flash plugin.