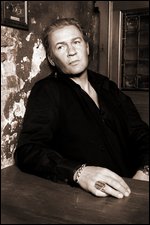 Logan first won the Eurovision Song Contest in 1980, with the song "What's Another Year" written by Shay Healy. In 1984, Logan composed the song "Terminal 3" which placed second at Eurovision, performed by Linda Martin.[3] He won the contest for a second time in 1987 with "Hold Me Now", which he also wrote. His third win came in 1992, as composer of Linda Martin's winning entry "Why Me?".

Johnny Logan was born Seán Patrick Michael Sherrard in Frankston, Victoria. Logan's father was an Irish tenor, known as Patrick O'Hagan, who performed for three different US presidents at the White House: John F. Kennedy, Lyndon B. Johnson, and Richard Nixon. The family moved back to Ireland when Logan was three years old. He learned the guitar and began composing his own songs by the age of thirteen. On leaving school he apprenticed as an electrician, while performing in folk and blues clubs. His earliest claim to fame was starring as "Adam" in the 1977 Irish musical Adam and Eve.[4]

He adopted the stage name Johnny Logan for the main character of the film Johnny Guitar. He released his first single in 1978. He first attempted to participate in the Eurovision Song Contest in 1979, when he placed third in the Irish National Final with the song "Angie".[5][6]

Owing to a mix-up, two follow-up singles were released almost simultaneously; "Save Me" and "In London". With confusion by radio stations over which to play, both singles flopped. Another single released in late 1980, a cover of a recent Cliff Richard song, "Give A Little Bit More" was a more concerted effort and although it narrowly missed the chart, the momentum from Eurovision was now lost. Logan blames his lack of success in the UK on poor management and his inexperience.[10]

In early 1983, Logan attempted a comeback in the UK with the song "Becoming Electric" with a new sound and image and promotional push, but was unsuccessful and again in 1986 when he rebranded himself Logan with the song "Stab in the Back". Logan was actually classed as a One-hit Wonder with "What's Another Year" in the UK until his second Eurovision winning song was released, seven years later.

In 1987, he decided to make another attempt at Eurovision and with his self-penned song, "Hold Me Now", he represented Ireland at the Eurovision Song Contest in Belgium. The song won the contest and again, Logan had a major European hit with the song and reached number two in the UK (although it outsold "What's Another Year").[11][12] Keen to continue this success, Logan released a cover of the 10cc song "I'm Not in Love", produced by Paul Hardcastle as a follow-up, and an album. Both single and album made the UK charts but were not significant enough to sustain a continued chart career.[13]

The following year, Logan released his next single, "Heartland" which became a hit in the Irish charts and from then on, concentrated on his career in Ireland and Europe.[14]

Having composed the Irish Eurovision Song Contest 1984 entry for Linda Martin, "Terminal 3" (which finished in second place), Logan repeated the collaboration in 1992 when he gave Martin another of his songs, "Why Me". The song became the Irish entry at the finals in Sweden. The song took the title and cemented Logan as the most successful artist in Eurovision history with three wins.[2]

Author and historian John Kennedy O'Connor notes in his book The Eurovision Song Contest The Official History that Logan is the only lead singer to have sung two winning entries and one of only five authors/composers (all men) to have written/composed two winning songs.[15]

Logan continues to perform and write songs. He is sometimes referred to as "Mister Eurovision" by fans of the contest and the media at large.[1] Throughout his career, which spans four decades, Logan has released no less than 40 singles and 19 albums. He has continued his love of participating in musical theatre, having toured Norway with Which Witch, an opera-musical originating in that country. In 2002, he took part in the UK television quiz show Never Mind the Buzzcocks as a team panellist in a Eurovision-special.[16]

In October 2005, "Hold Me Now" was voted as the third most popular song in Eurovision history at the 50th anniversary concert in Copenhagen, Denmark. "What's Another Year" was also nominated amongst the 14 finalists. Logan has sold more than 3 million copies worldwide. "Hold Me Now" is also a global million-seller. "Hold Me Now" has been adopted by fans of Bohemian F.C. (Bohemians) as their anthem and it is sung primarily at away games. In 2007, Logan advertised McDonald's Eurosaver menu in Ireland. In 2007, he sang "A State of Happiness", advertising the Dutch Center Parcs. In 2009 and 2010, he performed in the Celtic rock opera Excalibur, and continues to do so in 2011. He mentioned on TTV on RTÉ Two that he was considering writing a song for Ireland in Eurovision Song Contest 2010. In 2011, Logan received some publicity over comments perceived as an attack on Jedward, that year's Irish Eurovision entry. When the identical twins appeared on The Late Late Show, presenter Ryan Tubridy asked them how they felt about Logan calling them "an embarrassment to Ireland". Logan later clarified those comments: "What I said was that I find them embarrassing to watch. It's like watching two Frank Spencers in Some Mothers Do 'Ave 'Em. It's like watching a train crash you can't look away, but at the same time you don't want to see it".[17]

He subsequently refused an interview with RTÉ broadcaster Derek Mooney as, according to Mooney, "he thought we were going to stitch him up". Logan gave an interview to Today FM broadcaster Ray D'Arcy instead.[18] On 16 December 2012, he will be appearing as musical guest on X Factor (Romania).[19]

Logan lives in Ashbourne, County Meath, Ireland. He rarely gives media interviews due to what he claims have been frequent misquotes.[17]

Logan was one of the recording artists that appeared in the Irish TV series "The Hit" going against Duke Special . He shortlisted the song "Prayin" by Alan Earls and Jamie Wilson's "Rain" from the pitching rooms. He chose to release "Prayin" for the chart battle against Special who chose a song called "1969" by Aaron Hackett. Logan won the chart battle with his song charting at number three in the charts while Special's charted at number five. Logan returned for the final where he performed "Prayin" with the RTÉ Concert Orchestra and was runner-up to Finbar Furey.

For a more comprehensive list of all European single releases see discography here [1].

This article uses material from the article Johnny Logan (singer) from the free encyclopedia Wikipedia and it is licensed under the GNU Free Documentation License.