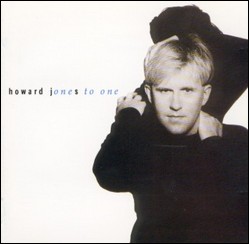 Howard Jones (born John Howard Jones, 23 February 1955, Southampton, Hampshire, England[1]) is an English musician. According to the Guinness Book of British Hit Singles & Albums, "Jones is an accomplished singer-songwriter who was a regular chart visitor in the mid 1980s with his brand of synthpop. Jones, who was equally popular in the U.S., appeared at Live Aid".[2] Allmusic journalist, Stephen Thomas Erlewine adds, "Jones was one of the defining figures of mid 1980s synthpop. His music merged the technology intensive sound of new wave with the cheery optimism of hippies and late 1960s pop. Jones racked up a string of hits in the mid and late 1980s, before he retreated into being a cult figure in the 1990s".[1]

He is the eldest of four boys (brothers Roy, Martin, and Paul). Born in Southampton, he spent his early years growing up in Rhiwbina, Cardiff, South Wales where he attended Whitchurch Grammar School. And Stokenchurch, near High Wycombe, Buckinghamshire and attended the Royal Grammar School.[3] Jones took piano lessons from the age of seven, and when he was a teenager, his family had relocated to Canada, which is where he joined his first band, a progressive rock group called Warrior.[1] Eventually, Jones moved back to the United Kingdom, where he played in a number of different groups.[1] He then spent a year at the Royal Northern College of Music in Manchester.[1]

He appeared as a solo artist in local venues in High Wycombe, before inviting the mime artist Jed Hoile, who used to do improvised choreography, whilst doused in white paint, as Jones played behind him.[4] In 1983 Jones hired the Marquee Club in London and invited record labels to come and see him perform.[5] After a well-received John Peel session he obtained support slots with China Crisis and OMD before signing to WEA in the UK and Elektra in the U.S. in the summer of 1983.[1]

After a promotional frenzy, his first single called "New Song" was released in September 1983 and reached the UK Top 5[2] and U.S. Top 30.[6] He made his debut performance on BBC Television's Top Of The Pops in October 1983, watching the performance on a borrowed television resting on an ironing board before a concert at the University of Kent. He subsequently had four more hits over the next twelve months and a UK Number 1 album, Human's Lib, which eventually went double platinum.[2] Thanks to repeated exposure on MTV, the album became a moderate hit in the U.S.[1] Later in 1984, "New Song" and "What Is Love" became American Top 40 hits, while "Pearl in the Shell" became his third UK Top 10 single.[1] Human's Lib went gold and platinum in a number of countries. Jones had developed a loyal teen following, and his mother and father, Thelma and John Jones, ran his fan club.[3][4]

In the summer of 1984, he released "Like to Get to Know You Well", which he said was 'dedicated to the original spirit of the Olympic Games'. Although it was not an official Olympic anthem for the Games in Los Angeles that summer, it was a worldwide hit. It reached Number 4 in the UK Singles Chart.[2] The sleeve featured the song title in ten different languages; while Jones sang the title line in French and German on the extended 12" version. The song also appeared in the film, Better Off Dead (1985), and the computer game, Grand Theft Auto: Vice City Stories (2006).[3]

Jones' second long player was a remix album.[3] It contained six songs, all but one of which had been previously released, but which appeared in elongated formats, including the multilingual version of "Like to Get to Know You Well".[3] The record sleeve for The 12 Inch Album, featured a miniature Jones standing next to a 12-inch ruler.[3]

In 1985, Jones phased Hoile out of his live show, and released his second studio album, Dream into Action.[1] He introduced his own backing band, including the female backing vocalist trio, Afrodiziak.[3] Afrodiziak featured Caron Wheeler (who went on to greater success with Soul II Soul) and Claudia Fontaine (who became a renowned backing singer).[3] Playing bass guitar was Jones' own brother, Martin.[3] He had to have an extra string added to his instrument to play some of the bass lines which had originally been played on a keyboard. One of the singles released from this album, "No One Is to Blame", was later re-recorded and featured Phil Collins as drummer and producer. Dream into Action was a worldwide hit and Jones' most successful album, reaching number 2 in the UK and number 10 (and going platinum) in the U.S.[4][1] The album spawned the hit singles "Things Can Only Get Better", "Life In One Day", and "Look Mama".[1] In July 1985, Jones performed at Wembley Stadium as part of the Live Aid concert, singing his 1984 hit "Hide and Seek" while playing a piano belonging to Freddie Mercury.[3] He also embarked on a world tour reaching Japan, Australia and the U.S.[3]

In the spring of 1986 in the U.S., he released Action Replay, an EP of remixes that featured a new version of "No One Is to Blame".[1] It became Jones' biggest U.S. hit, peaking at number 4.[1] However, by this time, Jones' fortunes were changing in his native UK and "No One Is To Blame" peaked at a relatively lowly 16. His next single, "All I Want", peaked at number 35, and would be his last UK Top 40 hit. Jones released his third studio album, One To One, in October 1986, which peaked at number 10 in the UK and would be his last hit album.[1][2]

In June 1988, Jones performed at Amnesty International's Festival of Youth at the Milton Keynes Bowl.[7] Jones' subsequent albums Cross That Line (1989) and In the Running (1992) both performed poorly, the latter even failing to chart.[4] He had further minor hits on the Billboard charts in the U.S. during this period, including "Everlasting Love" (1989, his second #1 hit on the U.S. Hot Adult Contemporary Tracks chart after "No One Is to Blame"), "The Prisoner" (1989), and "Lift Me Up" (1992).[6] With his ten year tenure on the Warner music label at an end, a greatest hits compilation The Best of Howard Jones was released in 1993. The album peaked at number 36 in the UK, but by 2005 (12 years after its release) it was certified Silver by the BPI for 60,000 copies sold.

After Jones contract with Warner Music UK expired, he concentrated on production, songwriting and running a successful vegetarian restaurant called 'Nowhere'.[3] He started his own record label, Dtox, and produced an album, Working in the Backroom, in his own recording studio ('The Shed'). The album was made available only at concerts and through his official website.[4][1]

For the next two years, Jones continually toured America and Europe.[1] In 1996, he released Live Acoustic America and People followed two years later.[1] In 2001, Jones played keyboards for Ringo Starr on his All Starr Band tour.[3]

On 20 September 2003, Jones played a sold out twentieth anniversary concert at the Shepherds Bush Empire, London, commemorating the release of his first single.[8] He was joined by Midge Ure and Nena, as well as his mime artist, Jed Hoile. A recording of this concert was later released on DVD.[8] Jones continued to tour and write new music, collaborating with Robbie Bronnimann to co-produce music for Sugababes and Jones' own 2005 album Revolution of the Heart.[1] He toured playing gigs in the United States, Italy, Germany and Sweden and played a number of times at the Edinburgh Festival in 2006.[9] The same year Jones provided a vocal for the song "Into the Dark" by Ferry Corsten for the latter's album, L.E.F.[10] Jones also re-recorded "Things Can Only Get Better" in Simlish, the fictional language spoken by characters in Electronic Arts', The Sims 2.[11] Jones was also featured on Katrina Carlson's cover of "No One Is to Blame", which entered the U.S. Hot Adult Contemporary Tracks chart in 2007.[12]

In October 2006, Jones released "Building Our Own Future" as a podsafe track, as one of several established artists looking to use podcasts as a new means of promoting their music and tours.[13] The song debuted at #1 on the PMC Top10 on 29 October 2006 and spent four weeks at the top of the chart. Howard's track "Revolution of the Heart" spent five weeks at #1 on the PMC Top10 during 2007 and finished the year as the #2[14] song in their annual countdown.

Jones embarked on an acoustic tour of Australia in 2007, beginning in Brisbane and concluding on 5 April in Perth.[15] The Revolution Remixed & Surrounded album was followed in November by Live in Birkenhead. Jones performed another acoustic set, with other 1980s acts at the Retrofest, on 1 September 2007 at Culzean Castle in Ayrshire, Scotland.[16] Jones also went into the studios with The Young Punx to record vocals for their summer 2008 release, "And The Feel Goes On".

Jones practices Nichiren Buddhism and chants Nam Myoho Renge Kyo daily. He is an active member of Ska Gakkai International in the UK, and is musical director of on of its choirs, the Glorious Life Chorus. The chorus performs some of his songs in its repertoire, including "Building Our Own Future" and "Respected". He returned to Australia again in 2009, this time accompanied by vocalist Laura Clapp and music technologist Robbie Bronnimann.[17] On 26 February 2009 Jones was at the UK premiere of Roland's new V-Piano in Bristol and performed "Hide and Seek".[18] He continues to tour, and played the 'Big Hair Affair 2009' on 1 August 2009 at the Ryedale Arena, Pickering, North Yorkshire.[19]

His next album 'Ordinary Heroes' will be released in late 2009,[20][21] and he will be touring London, Cardiff and Manchester with a string section and the Morriston Orpheus Choir (in Cardiff), as well as performing the new album.

He currently lives (according to the local BBC website) in Creech St Michael, Somerset.

Jones is a member of the board of directors for the Featured Artists Coalition.[22]

This article uses material from the article Howard Jones (musician) from the free encyclopedia Wikipedia and it is licensed under the GNU Free Documentation License.

Gimme Love Karavann
Update Required To play the media you will need to either update your browser to a recent version or update your Flash plugin.